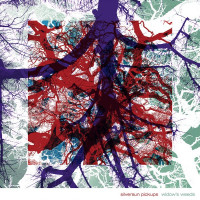 When it comes to Silversun Pickups, Carnavas and Swoon are where it's at. Songs like "Lazy Eye" and "Panic Switch" threw them further and further into the mainstream light, and while records like Better Nature felt like the band wanted to break away from the Smashing Pumpkins comparison, well, it just didn't resonate as much as diehards hoped. Neck of the Woods in particular stands out as a huge deviation with its synth-rock essence but all in all, even at their worst, SSPU still creates magic few can replicate. Widow's Weeds falls into that similar territory of not quite epic, but not as bad. It's arguably their most middling record to date.

It opens up with a synth-draped "Neon Wound" -- which feels like something you'd get off the Stranger Things soundtrack and which, well, feels like it's a song taken straight from Neck of the Woods. Not the best start personally but as the record progresses, Brian Aubert starts working in more hooks and catchy melodies, albeit the record never goes beyond the melodramatic mid-tempo range. There's a sweet 80's post-punk/orchestral take on "It Doesn't Matter Why" but by the time songs like "Freakazoid" roll around, it just feels like SSPU are playing it safe. "Simpatico" is another tame example leaving you wondering why couldn't they just take these catchy choruses and bouncy rhythms to the next level. After all, fizzy intensity and overall energy is where they shine best, and it's reflected in their set lists for live shows.

Songs like "Don't Know Yet" doesn't help the cause as it feels like some sort of Jonas Bros. track, and truth be told, if SSPU wants to go this route, cook up shorter, punchier tracks. 10 songs running at 50 minutes total should be engaging but it feels like some songs run on and on, meandering. It doesn't help the track rips off a solo that feels like Third Eye Blind's "Jumper" (not because it's a bad song, but because it just reiterates there's a lack of freshness, uniqueness and originality on tap).

But I must say there is vibrance on some of the cookie-cutter songs that grow on you as time passes. "Straw Man" could be their "Tonight, Tonight" and then you've got '90s alt. jams in the title track and "Bag of Bones," probably kickstarted by that 3EB note I mentioned. And these aren't bad, but again, there's an injection of life that's missing. Maybe if Nikki Moninger didn't hold back and feature more, it'd help add an indie aesthetic but the songstress really feels hidden here, which sucks because the more and more she was at the front, the better a direction I think they were embarking on. I guess, we've gotten a bit tired and bored with Aubert, and not shaking things up kinda doesn't help the case. I mean, another synth pop record might have felt bland but what SSPU is doing here is tantamount to lifeless rock at times.

Christopher Guanlao doesn't even get to shine on the drums until "We Are Chameleons" and even here, you don't get that swelling emotion and rise SSPU invoked in the past. The spine and overall potential for a great record is definitely here but it was all about adding meat to these bones, and sadly, SSPU just comes off way too lean.

HappyHappy/Sad2/Punk with a Camera: Live in Denton