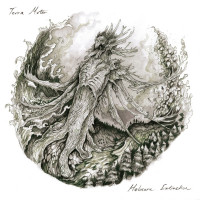 Australian melodic crust outfit Terra Mater broadcast clearly what’s on offer with their debut LP Holocene Extinction Parts I & II. A combination of two releases, this album packages "Part I", released in 2017, together with the all new material, "Part II". The album, titled with the term for the current mass extinction on Earth, by the band performing under the Latin for 'Mother Earth', makes crystal clear their message, intentions, and the genre on first sight. Yet, just as you settle in to press play, a slow, solo violin intro weaves its way into the room. Setting themselves apart from their genre brethren, Terra Mater use string arrangement to wonderful affect throughout this album and deliver a beautiful, brutal, defense of our planet very much in line with the current thematic state of crust.

The album is presented in two tracks, clocking in at seventeen and fourteen minutes and played out in movements, with recurring themes and instrumental refrains lacing the stanzas into each complete piece. The payoff of such long, intricate entries is the heavy world-building accomplished on the tape. Just as frequently as the strings delicately frost the violence of the vocals and guitars, they feed the brutality, playing dreadful or ominous. You’re truly painted into a sense of place through the entire album by both the beauty and the doom that the imposing violin portends. Mixed gender vocals provide an added textural diversity that allows each track to avoid becoming a tiring listen over their extended run-times, without necessitating clean vocals.

The violin and splashy cymbals portray a vibrant, wet, green sonic landscape, dewy and mossy. The buildups are tremendous and given ample time to grow upward and outward, becoming unbearable in scope before sprouting the next movement. The first excellent concept brought lyrically in “Part I” is the repeated condemnation of man as ‘entsentient beast’, and the crying-out-loud question of ‘can’t you feel the pain of your forest?’, emphasizing that it is our forest, it is of us, challenging how we have conceptualized our existence as separate from the health and nature of our planet. Musically the songwriting has advanced in the two years since the release of “Part I”, and “Part II” displays more skill in intertwining the strings and the traditional instruments, rather than one augmenting the other. Where “Part I” was introduced with the delicate and haunting violin, “Part II” enters with harrowing guitar feedback. We do get more creative guitar work blossoming, specifically between the eighth and eleventh minutes, and the drumming shifts toward a staccato, marche militaire affair. The outro dawns with violin before being joined by the full band, and the two elements march our theme out hand in hand, interpretationally onward in a funeral procession or forward in battle formation. Mirroring the first half’s repeated assault of ‘condemnation / devastation / ruination,’ “Part II” sends us toward dusk with a foreboding farewell, ‘rising seas / catastrophe / heed its warning’. The Queensland quintet creates a true journey of an album that plays out in only two parts, but so many waves, crescendos, and crashes.

The Appleseed Cast: The Fleeting Light of Impermanence