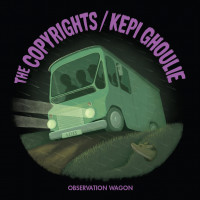 A few months back, The Copyrights and Kepi Ghoulie released a newly recorded version of Re-Animation Festival, which the Groovie Ghoulies had originally released way back in 1997. And now, Kepi and the boys from Illinois have followed it up with a mix of new and old material. Both acts contributed 2 songs, with each group covering a song from their counterpart’s back catalogue.

With their first new music in years, The Copyrights have returned to the formula that garnered so much attention in the first place. The first track, “Welcome Wagon”, is just as catchy as anything else they’ve released, maybe even more so. This is partially because the song doesn’t necessarily follow a typical structure. Each part of the song could stand alone as a chorus. And when we finally do reach a chorus of sorts, it breaks down to just vocals, bass, and a little percussion. This causes a bit of anxiety, which is ultimately resolved towards the end of the song when it repeats, this time with a fuller sound. The second track, “Are You Passionate”, is a cover from the album Kepi Goes Country. The Copyrights version still maintains Kepi’s sound and message, yet it seems slightly more powerful, which is a welcome sound that seems to fit well on this side of the 7-inch.

If this is the first time you’re listening to Kepi Ghoulie, then the flip side may come as somewhat of a shock, simply because it is such a different sound. Both tracks are mostly acoustic, with help from Kevin and Allyson Seconds. “Observation Day” may take some time to get used to, yet it is a song that will likely get stuck in your head, though it doesn’t really have a hook. The next tune, “Four Eyes”, seems surprisingly faster than the original Copyrights version. Kepi and crew have done a pretty good job of making it sound unique, while not straying far from the original version.

When I first saw that The Copyrights and Kepi Ghoulie were playing and recording together, I thought it was a pretty unlikely pairing. And that still holds true after listening to this 7-inch. But, I respect and admire this combination. It’s refreshing to listen to a record with veteran musicians that sound so different from each other. Fans of The Copyrights will definitely dig their new tunes. And fans of Kepi will definitely enjoy his songs. But I’m not so sure the fans will love the crossover. Despite this though, the record is a really cool concept coming off the heels of Re-Animation Festival.