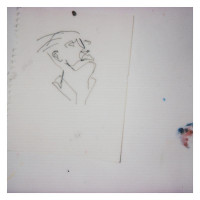 Looking at it on paper, this record is 100% my type, as the saying goes. Debut album from San Francisco punks, FFO Hot Water Music, Nothington, et al. What’s not to like? Something I’ve often thought about the whole FFO format/process though, is that it often refers to the leading lights of specific scenes to frame the band in question, possibly implying slightly generous levels of quality that may not quite be there. Yet, at least.

That being said, Reunions certainly have common ground with the bands mentioned above. See also Let Me Run, Kid You Not and various other gravelly-vocal punk bands who have if not a whole foot in that heartland Americana, Gaslight-core scene, then certainly a couple of toes. Again, this is something that sits perfectly comfortably with me, because when it’s done well, it’s a joy to behold.

Firstly, I’ll say there are a whole host of positives on this record that warrant discussing. They’re obviously all good musicians and Eric Saylor’s vocal (Saylor also plays guitar on the record) is a pleasing mix of heart and grit. For the most part the production is superb and serves the songs well (credit to Scott Goodrich - The Story So Far, Direct Hit!, Culture Abuse) with lead guitar (Nate Serdy) and rhythm section (David Langer – Bass, Shane Hendry – Drums) all taking their place in the spotlight when appropriate to good effect. These small tweaks are intermittently made to enhance individual moments but eschewing too much overall tinkering helps retain the mood of a proper band. It really does have the feel like a gang of guys who have known each other for a long time, making music that they love and believe in. That carries bands a long way, but it’s not everything.

Which leads me to my main critique, being that while maybe two-thirds of the songs manage to be at turns catchy, driving, anthemic and even tender with a dexterity and dynamism not often seen in a debut, the other 3 or 4 are basically just fine. Good examples are “Sentimentality is for Suckers” and “In Blackout Rooms”. They’re perfectly serviceable vessels for some good dudes to play punk rock, but I don’t know that they’re exactly memorable. Even in the more generic-feeling tracks though, there are occasional middle 8’s, pre-choruses, etc that really get the blood pumping, but that doesn’t extend to the entire song and as a result, some tracks can feel a little interchangeable. On a couple of occasions I found myself specifically wishing that the guitar work was a little looser or wilder, to help propel these songs and give them a bit more personality.

But permit me to elaborate on a few examples that make me excited about this band. Album opener “Light Left On” has that infectious upper-mid tempo that stomp bands from this scene often do so well, it has a few great little lead licks that give the added character that I mentioned above and ultimately, it just feels like a cohesive, fully-formed song that will work on a stage or in your headphones equally. It’s a great way to kick things off, no doubt. On “An Endless Night, a Century”, the band bring the pace right down. Saylor’s quiet, melancholic lyrics drift out over a simple picked pattern until around the one-minute mark when the rest of the band come in and bring with them a sense of grandiosity, some stirring backing vocals and a sense that the band have ability and ambition beyond their more straightforward compositions.

Overall, this is a solid 33-odd minutes of emotive punk rock that I’m sure will appeal to a lot of the punk community (myself included), but I think it’s not quite the finished article just yet. I’m sure it’ll be great when played live and the energy that exists as potential in the songs is brought out, but I’m just as excited about what this band could be capable of when they really lean into the bigger hooks and melodies in the more memorable songs. As a debut, I think it’s equal parts impressive and promising, but I suspect Reunions could have a record in them somewhere down the line that will really be something to savour.

Russian Girlfriends: In the Parlance of Our Times