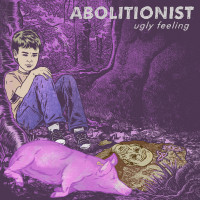 Decouple the Deadly Duo split EP and grab a blender. Throw in three parts Side A from The Freeze and one part Side B from The Bollweevils. Add a pinch of 13 Songs, mix it up, toss it in the oven for 24 minutes and VOILA, you have Ugly Feelings.

In their latest release, Abolitionist carries on the classic late 80’s, early 90’s hardcore style that they’ve made more prominent in their last few records. They keep the BPMs at bay, the vocal deliveries in uniform and top it all off with a coating of melody. The band continues to create short, angry and politically-driven songs without ever evolving - but that’s a good thing. They’ve remained steady throughout their ten-year career, never trying to be what they weren’t, never really trying to experiment.

Ugly Feeling kicks off kind of strange with “Failed Mutation.” Something was off about it, particularly the opening chords. Then it hit me, it’s Green Day’s “Stuck With Me!” There’s literally zero similarities in the two except for the first 2-3 seconds, but I couldn’t un-hear it with every listen. Whatever, it’s a weird observation, but you can’t tell me I’m wrong.

It continues with, “Yelling,” the kind of song that will pull a hardcore vet back onto the dance floor. The type who, 20 years earlier, was the kid that Dustin Herron sings about a few tracks later in “World Inside.” They stand in the back of the venue, beer in hand, inching closer and closer to the stage with every drink that goes down. A couple toe dips into the circle, head-bobbing picks up and then “HE’S JUST NOT GETTING IT!” drops, pulling them right back in.

The album coasts through in what you would expect from Abolitionist. Songs that spark your adrenaline and get you moving, but end before you can even break a sweat. The similarities to Clif Hanger and The Freeze are never more prevalent than on “The Selfish Gene.” It subtly builds up with an opening guitar reminiscent of Refused’s “New Noise,” launching into a gritty, sharp-edged ripper comparable to The Freeze’s Misery Loves Company era. But this is the sound of Portland, not Boston, (or LA.)

The LP closes out with a one-two floor punch of breakdowns and shout-along vocals in “Ambivalent Nerd” and “Walls.” These two are some of the best songs in the bands discography and perfectly placed at the end of the record.

Ugly Feelings is what it is – an enjoyable record that you know you’re getting from Abolitionist at this point. No flash, no high-end production elements. Just 12 songs meant for a floor performance and a bunch of sweaty punks singing along with the band into the mic. It’ll get your core active, your fingers pointing, and it’ll be over before you even finish your coffee.

Russian Girlfriends: In the Parlance of Our Times