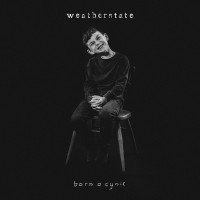 A month or so ago I was having the semi-regular conversation/argument with a friend of mine about the relative quality of pop punk records in the last couple of years. As a pop punk apologist, I took my usual stance of saying that although there was a decent amount of crap in the landscape at the moment, when the good stuff comes along, it still makes it all worthwhile. The difficulty with this position in 2019 is that there hasn’t been too much of the good stuff. And that’s probably something of an understatement.

But mercifully, that’s where Weatherstate come in; with their debut album Born a Cynic. The band are a Bristol-based 4-piece formed back in 2015 and they trade in chunky, anthemic, honest-to-goodness pop punk. It feels so good to say that about a record that I really like. So that’s the cat out of the bag. I get a huge kick out of this record, I really do. There are vocal hooks for days, uncomplicated but deeply satisfying riffs, snotty, brattish lyrics and a shitload of infectious energy. Listen to “Medicate” and tell me that the opening riff and swinging vocal line doesn’t get you tapping your foot - and that’s before the chorus kicks in which is, frankly, killer. “Brain Dead” is cut from a similar template with straightforward power chord riffing, allowing Harry Hoskins’ vocal lines to drive much of the song, melodically speaking, but they still make way for a breakdown in the final third, which will no doubt go down well in the live show. Basically, a lot of it is pop punk 101, but done to a standard that you don’t hear so much these days and it's also delivered with just enough punk grit to stop it being saccharine. For an apt and clear-cut depiction of the band’s biggest influence, check out the video to “Medicate” with its shot-for-shot “Basket Case” replication/homage, too.

As much as I’ve been pretty clear that I love this record, I’ve also mentioned I’m a bit of a pop punk apologist. So in the interest of journalistic integrity, it’s probably only reasonable to discuss the album’s limitations. I could understand (if not agree) that vocalist/guitarist Hoskins’ voice might not be to everyone’s tastes, living as it does at the more nasal end of the spectrum and maybe some might feel their sound is a little too close to their influences to be their own, although to my mind there’s enough character and quality here for it to stand up. The one criticism I would have and that I suspect others may level at the record is that it is a little one-note. There’s not a huge array of different pacing, tone, or structure and although I enjoy each of the 11 songs over the record’s 33 minutes, I can appreciate it may be a little lacking in diversity for some.

But lest we forget, this is their first full-length. Not many people are able to bring the fully-developed extent of their abilities to the table at the first time of asking, so for now I’m happy that I’ve got another band I can keep an eye on, catch their live shows, and place a little more of my trust in to keep carrying the torch for decent pop punk bands. Cheers Weatherstate - I owe you a beer or two.