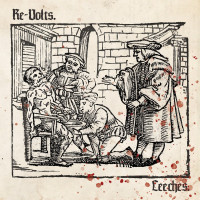 Spike Slawson has got a lot of irons in the punk fire. Some know him as the golden voiced, lounge lizard frontman of cover band/punk supergroup Me First and the Gimme Gimmes. Others may know him from the 15 years he spent as bassist for genre ignoring punks Swingin’ Utters. Still others may be more familiar with his folk punk side project, Filthy Thieving Bastards, or his most ridiculous project, Uke Hunt. All of those bands are worthwhile, but they sometimes make it easy to forget his actual punk band. Re-Volts are a San Francisco based band that features Slawson on vocals/guitar, and another punk journeyman, Jack Dalrymple on guitar. Dalrymple has been a prominent member of One Man Army, Dead To Me and Swingin’ Utters. Re-Volts released their debut, self titled EP way back in 2007, but have been mostly dormant for a decade. Now, seemingly from out of nowhere, the band has released three singles in the last year. Maybe we can even dare to dream of a full length.

So how has the passage of time treated Re-Volts? Pretty well, at least if these songs are a fair indication. Leeches is two new songs and a really old song. They have the same great vocals, lead guitars and catchiness as Re-Volts, but feel a little less aggressive. A-side, “Leeches”, is closer to bouncy garage rock than driving punk, although the drums give a not-so-subtle nod to the Ramones. There is no shortage of melody. Toward the end, it even features some horns, and some farfisa organ compliments of Dwarves’ madman Hewhocannotbenamed. If you were hoping that it would be a metaphor for the music business or something, that doesn’t appear to be the case. It seems to actually be about the primitive medical practice. The artwork would seem to confirm it.

B-side, “Metropolis or Bust”, is probably the punkest song on the record. It’s a rebellious youth anthem about burning down the boring, old suburbs, performed by middle aged men. (The children might be the future, but their music is awful. The revolution better not have an EDM soundtrack.) Or maybe it’s just about moving to the city. Either way, it’s a great track. The other B-side, “Love Letters”, was originally released in 1945, and apparently was in a movie of the same name. Its inclusion might be a subtle nod to MFGGs or Uke Hunt. Or maybe they just felt like throwing in an old timey song. Either way, it works well with Slawson’s crooning. Longtime Re-Volts fans are going to love Leeches, but it would be a fine spot for those unfamiliar with the band to hop on board too. Leeches will definitely make you want to dig deeper into Re-Volts’ brief catalog.

Joey Cape: Let Me Know When You Give Up