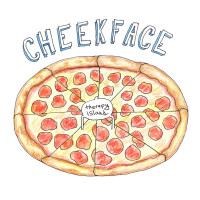 Here, in no particular order, are three of the best lyrics on Therapy Island, the debut album / collection of singles from L.A’s Cheekface:

“Then I look up in the sky and there it is / a formation of clouds that spells out “Abolish ICE.”

“Waiting in line at the juice bar when it occurred to me: I may be too fat to be Spider-Man, but not to be Body Positive Spider-Man.”

“Now I’m gonna be a little condescending / that means I’m talking down to you.”

To giveaway any more would be to spoil one of the album’s primary delights. Imagine each of these lines, delivered flat and plainspoken, the smirk just barely audible. That last example is an important one, as it’s more or less the inflection point that will make or break the album for you. How you read it will color the experience; are you in on the joke, is the joke on you?

Ultimately, it might not matter. Listening to Therapy Island is like hanging out with the “Are You Being Sarcastic Dude / I Don’t Even Know Anymore” guys from the Lollapalooza episode of The Simpsons. I suspect Cheekface would like that reference. It’s the kind of semi-affluent, semi-youth culture, semi-progressive hallmark that the album spends its time examining (Lampooning? Criticizing? Championing?).

Not to give away more choice lyrics, but the line “You have received assurances that you are a friend of the pod,” from the especially Cake-like “I Only Say I’m Sorry When I’m Wrong Now,” encapsulates the band’s area of focus; the cultural collapse and spiritual ennui of a generation of people who graduated from liberal arts college and got themselves a subscription to The New York Times.

The self-imposed detachment and position as an observer rather than a participant Cheekface a little wiggle room when its wry observations don’t quite land. There’s never much venom in the album, as much as there is a sense of smug detachment (one more lyric for free; “There's a bunch of random rich guys / in Male Feminists The Band”). After all, if you’ve got no skin in the game, there’s nothing to be lost. That angle hurts some of the album’s lesser songs; I’m thinking specifically of “Glendale,” which is probably great if you live in the greater L.A area, and “Still Life,” which feels insular and too personal compared to the wide-angle view much of the album takes.

That you can’t come away from the record knowing exactly what the band thinks - or, rather, that you can come away with your own interpretation, makes the album a perplexing, rewarding experience. Highlights include the post-Parquet Courts shuffler “Nice Town / Dry Heat,” the especially punky and annoying to type out “S.T.O.P.B.E.L.I.V.I.N.G,” and the new-wave earworm “Eternity Leave.” The band get a ton of mileage out its three-piece configuration, weaving in and out of multiple alt-rock genres (no-wave art-punk, chunky surf-rock, et al) without losing a beat, but it's the lyrics, and the sardonic delivery of those lyrics, that really sell the album. It may not be clear who the punchline is on Therapy Island, but Cheekface will be laughing, either way.