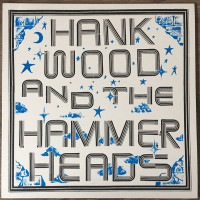 Hank Wood and The Hammerheads

Hank Wood and the Hammerheads self-titled third LP is an album we aren’t supposed to get anymore. It’s an extinct species brought back to life. Whenever the government gets around to cloning that mammoth, they should name it Hank Wood. This is a relic from a bygone era, and all the places you could play this type of music are either boarded up or torn down for sports stadium parking structures.

As a Michigan boy, I love the Stooges and MC5 influence at the heart of this recording, but every once in a while, the world is reminded that New York, New York continues to be the epicenter of this constantly expanding and exploding universe, and that reminder came in 2018 through the work of Hank Wood and The Hammerheads. This album carries the kind of kinetic, frenetic performance that can be near impossible to bring to a recording. Hank Wood plays his throat like a percussion instrument. The performance captured here has me feeling exhausted just imagining the live rendition. So much of this album trades in traditional rock and roll (there’s a straight line from “Blitzkrieg Bop” to “You Wanna Die”) but the whole damn contraption still feels so fresh and vibrant, for all this album looks to the past, it also feels like it couldn’t possibly have been crafted a minute before right now.

This albums ethos and lyrics are fresh and sharp, with Hank wailing about,… well, pretty much just about how terrible life is. Cuts from across the record hide behind over-amp’d guitar cries of existential horror and death fetishism, you’ll have to ask anyone else just how in the hell a band can manage to make an upbeat rock and roll party animal record with vocals chirping out the likes of lines such as ’that’s pain, yeah it’s true, tell me what the fuck am I supposed to do?’, ’you know you wanna to die, baby, you can’t be happy and you know it!’, ’I wanna die, baby, that’s the truth’, ’yeah, baby, I don’t wanna live no more’, ’and let me tell you about death, baby, me and you, that’s all we got left baby’. If the dread at life doesn’t turn you off, don’t be dissuaded by the over-use of ’baby’ and ‘uh’ and ’fuck’, each of these well-timed percussive interstitials is a cymbal crash in the working-like-a-bastard performance Hank lays down to the tape here. Another old-school thread coming through with this LP is the judicious use of Organ. I wouldn’t say those keys and valves are ever playing lead, but the organ is an undervalued Clydesdale, a true workhorse pushing this rocket off the terrestrial known, and into the ether few bands will ever touch.

All of this is to say: this is an incredible album. And would someone go check to see if Iggy Pop is still alive? Because if it isn’t him possessing Hank Wood, then I shudder to think what the fuck could be.

The Specials: live in Chicago