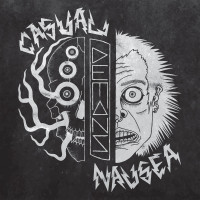 Tumultuous and rowdy politics in the United Kingdom continues to translate directly into tumultuous and rowdy political punk records for the rest of the world to enjoy, whether we understand how any of this works over there or not. The debut LP from Casual Nausea, Demons, covers a vast spectrum of political discontent; the struggle of the working class, environmental catastrophe, and corruption in religious and secular institutions all make the track listing. These Ipswich punks have so far been stingy with their recorded output, releasing nothing but silence in the four years since their excellent split with Sheffield’s Chewed Up, itself two years removed from their introductory demo recordings. They compensate on this cut with 19 tracks over 40 minutes, not a single one overstaying its welcome, with 8 tracks clocking in under two minutes.

For all the serious political strife that makes up the lyrical load the band maintains the energy of a riot throughout. They have a natural skill at sloganeering their chorus’ together, making two- or three-word segments impossibly sticky. You’ll find generous use of call-and-return, back and forth delivery among the three vocalists (that’s two dedicated vocalists, and the third with a guitar in his hands, an unusual lineup they wring to full gymnastic effect). Casual Nausea really show off the muscle three hot mics arms them with on “Demons” and “Fuck Up”. A-side standout “Blood in the Water” is a high point on the album, and carries the feel of early ska-core and crackrocksteady half-tempo ‘ballads’. They’ve publicly made self-comparisons to Gogol Bordello, bold to do with such traditional instrumentation, but they don’t disappoint in spirit and energy.

The album’s musicianship, on the other hand, would not hold up so kindly in comparison. There’s not much for sonic diversity, so across 19 songs a fair amount of them sound alike, and there are roughly two guitar tones working throughout. Picking any five song segment to use to judge the album as a whole would probably yield the same results. The guitar playing is certainly good, and often very fun, but you won’t find many surprises, and the repitition of the same style contribute to the albums’ strong continuity and cohesion, which is also a polite way of saying most of this album feels the same way in your ears. Regardless, this is a band that trades in energy and theatricality, not guitar noodling and technical proficiency, and these elements are best on display during tracks “Empty Rewards” and “Assembly Lines and Misery”.

I’m sure we’ll hear more technically impressive albums this year, but we’re not likely to find a political album with this much bite that’s equally this fun. Some elements work better than others, the three-vox melody on “Fuck Up” is the definitive sound I hear when I think Punk in ’19, but the recurring baseline begun in “Cockroaches” and recurring in “Terminator” and elsewhere later in the record is a little too barnyard in the mix. Opener “Vote” is a little corny, but still an important salvo ahead of the full spectrum of political messaging stampeding in behind it. The Marc Maron sample on “Corruption” goes on too long, but the quick and dirty hardcore of “Another Way”, as do another half-dozen tracks on this album, makes me feel the same way The Casualties did when I was fifteen. This energy is worth your time.

The Specials: live in Chicago

The Kreutzer Sonata: The Rosehill Gates