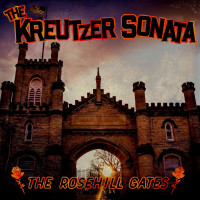 Living in the social media age, it's easy to get stuck in the spin cycle of immediacy. We want everything to happen right now and we'll obsess over it for a while. And then we'll completely forget, moving on to something else to obsess over. The Epoch of Instragram does not bode well for taking the time for introspection. It does not encourage reflection, just to rush onto the next medium to consume.

The Rosehill Gates, the new record by Chicago hardcore punks the Kreutzer Sonata, encourages contemplation. Now, they're not really providing a soundtrack for peaceful meditation -- outside of the outro to "The Pint and the Graveyard" and album closer "She Lived a Life of Sorrow," both of which emanate the melancholy vibe you'd expect from an album with cemetery gates on the cover -- The Rosehill Gates plants its roots firmly in hardcore punk and street punk. But thematically, The Rosehill Gates is a record of reflection, contemplating the stories of lives past, inspired by years working just outside of the Rosehill gates. What sorts of stories are contained by the people buried in those plots? What lives did they lead? On The Rosehill Gates, the Kreutzer Sonata encourages you to stop and think about life.

Lines like "Every man's chained to his grave," from opener "Degenerate Theory" to "Past graveyard fog and gunfights / In the fountains of Neptune I reflect my youth / but I’m gnarly, dumbfounded, my hearts lost in you," from the absolutely brilliant "Fountains of Neptune" just reek of the obvious inspiration drawn from the aforementioned Rosehill gates, those belonging to the Rosehill Cemetery. Vocalist Adam spent years working at a 4AM bar across the street and it is the rambunctiousness of booze and the melancholia of the graveyard that fuel The Rosehill Gates. Look no farther than "The Pint and the Graveyard" for evidence.

But this is hardcore punk through and through, and the Kreutzer Sonata don't let up, despite the heady lyrical matter. "Fast Times" is straight-up hardcore, hitting like the terrifying reality of creeping up there in age, only you see it coming from the first drum beat. "Strange Days, Dangerous Nights" is an ode to the rough-and-tumble underside of Chicago, with some solid leads bridging to some genius lines, which Adam barks out, occasionally alternating from hints of melody in his sandpaper voice. "Feast and Famines" is a rollicking punk tune, with some sick riffs (and whoas!), singing about that most punk of topics -- an ode to one's family history: "I wear my grandfather’s hat upon my head. I want to be the man that he was."

For all the aggressiveness contained within, The Rosehill Gates is a philosophical treatise, brimming with the high-brow influence stemming from the Tolstoy novella from which the name the Kreutzer Sonata originates. Opener "Degenerate Theory" is a blazer, but culminates with the thought-provoking line: "I’m matted, beaten, snarling, but living life finally / They call us degenerates, but we've got true perspective." "The Fountains of Neptune" is undeniably one of the highlights here. It's more melodic than most of the record, but the guys wrung out an absolute winner, steeped in introspection and nostalgia. If there's a sing-along here in the classic sense, "The Fountains of Neptune" is it, as Adam really lets his (gravelly) singing voice shine. Elsewhere, he gets into a lower register, almost an doom-death growl, as heard over same martial drumming in the outro to "Feasts and Famines," when he growls "Have you seen the old men when their blue eyes turn to ice? / It’s the embodiment of the feeling that time’s passing us by."

Time is indeed passing us by, so take some time to get lost in the Kreutzer Sonata's Rosehill Gates. It's a great record to follow along and reminisce with. Or if you want you can just focus on the ripping hardcore punk, spitting out snotty lines like "I’m Chicago’s bastard son of letting down everyone" (from "Stout Weather"). Either way, it's a hell of ride.