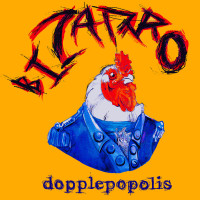 *For the sake of total disclosure, Greg Simpson, longtime Punknews staffer, and my pal, is a member of Dopplepopolis. Can I still be objective about his band? Probably, but if not, at least you’ve been warned.*

I always think of Greg Simpson as an indie rock guy. His fanboying on bands like The Mountain Goats and They Might Be Giants certainly doesn’t help. His other band with his wife, Outdoor Velour, definitely has an ‘80s college rock/’90s alt rock sound too. It’s easy to forget that he is (was?) also a big fan of ‘90s skate punk. Dopplepopolis is his tribute to his punk roots. Bizarro is the second EP from the Lafayette, Indiana based trio. It continues the Dopplepopolis tradition of nonsensical animal photos on the cover. On their self titled debut EP, it was kittens. This time around it’s a rooster.

By mentioning Simpson first, I don’t mean to give short shrift to his bandmates. It certainly appears that Dopplepopolis is a partnership of equals. The name is a play on doppleganger, and if you saw them you’d know why. Jonny Sommers bears a loose but undeniable resemblance to Simpson, and the two of them trade off between guitar/vocals and drums. (If we’re being honest, it’s really just the fucking mustache.) Bassist/vocalist Tim Brouk chooses not to look like he drives a windowless van and needs to stay 500 feet from schools.

I saw the band live before I heard their recorded music, and was definitely surprised and impressed. Dopplepopolis played harder, faster and fuzzier than I expected. Simpson was able to capture a surprising amount of that energy at his own Velour Underground Studios. “Bizarro Shut Up” features a Simpson vocal and starts things off with a bang. It’s super fast, surfy and upbeat, with robotic TMBG type vocals. “Birdman of Lafayette (My Husband is Dead)” might be the weirdest song on Bizarro. It has an overmodulated sample, Brouk on vocals, and is pretty fast and noisy too. It seems like the kind of thing that could inspire the next generation of serial killers.

“Digital Girl” has an ‘80s synthpunk thing going on, a Sommers vocal, and might be the closest thing to a pop song on the EP. “Bill Beaumont Blues” has a creepy Brouk vocal and and a Cramps vibe. “Tough Titties” is another Brouk vocal, and is probably the most fun song on Bizarro. A Simpson vocal on “Don’t You Hate the AM” wraps things up. It’s the only song over three minutes, and has a moody, swirling Valley Girl soundtrack or Jesus and Mary Chain feel. The six songs cover a fair amount of musical ground, but still manage to feel cohesive. It’s punk effortlessly combined with ‘80s college rock.

I like Dopplepopolis and Bizarro quite a bit. I don’t think it has anything to do with Greg being my pal, although it’s unlikely that I would have heard it otherwise. The truth is, this feels like three guys playing music for the right reason. That is to say that the making of the music is its own reward, and there is no unrealistic expectation of commercial success. They don’t sacrifice their weirdness or creativity in order to chase a hit. For that reason alone, you should check this out.

The Kreutzer Sonata: The Rosehill Gates

The Jackets: Queen of the Pill