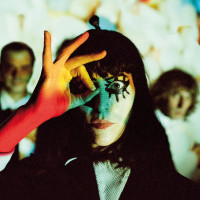 I’ve really come to enjoy my occasional mail from Voodoo Rhythm Records, all the way from Bern, Switzerland. I never know when something is going to show up, and I never know what to expect when it does, but it’s almost always good. The label specializes in garage rock in all of its many forms, which can cover a surprising amount of musical ground. I’ve heard plenty of punk, trash and psychedelia, but also gospel, folk and soul. The Jackets are a Swiss trio fronted by lead guitarist/singer/madwoman Jackie Brutsche. Queen of the Pill is their fourth album overall, and second for Reverend Beat-Man’s Voodoo Rhythm Records.

To paraphrase the late, great Lemmy, The Jackets play rock and roll. While Brutsche’s vocals and melodies are front and center, it’s her big, lumbering guitar riffs that really steal the show. Across the ten tracks, she’s able to coax a lot of different vintage tones out of her vintage guitar. There’s punk, surf, ‘60s girl group influences and more than a little Cramps psychobilly vibe. The sound quality on Queen of the Pill is impressive. If it weren’t so crystal clear, you might be tempted to think that it was actually recorded 55 years ago. I’m sure recording engineer Nene Barrato deserves much of the credit for that. Garage rock master King Kahn also contributed to songwriting and production. Both are top notch.

Queen of the Pill is packed with great rock and roll songs that will drive the kids in Europe wild, but will undoubtedly be largely ignored in the US. It’s a shame. Songs like “Dreamer”, “Steam Queen”, “Don’t Leave Me Alone”, “Queen of the Pill”, “Loser’s Lullaby” and “Be Myself” are worthy of airplay. They manage to have a confident swagger, while still showing vulnerability. The radio might not get it, but they still deserve a spot on your personal rock and roll playlist. The Jackets have toured with the current buzzband The Darts, and fans of that band will almost certainly love Queen of the Pill. Check it out.