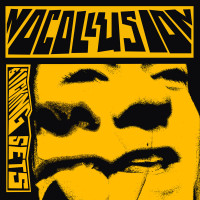 No Collusion are a newer three-piece band from Derry in Northern Ireland. They have recently released STICKING SETS as a digital four song EP. This collection of tracks is an honest homage to the classic 1977 sound alongside sprinkles of early 80s post punk.

The EP begins with “Jim” which right off the bat lets you know what to expect for the rest of the release. The track kicks off with a buzzsaw guitar lead followed by that raw and gritty classic punk sound we all know and love. The vocals are not unlike Joe Strummer or Jake Burns. Next up is “Shams” which highlights Stiff Little Fingers-like guitar riffage. There is one solo prominent towards the end of the track which makes the song fall a bit flat due to the absence of a rhythm guitarist. On “Aw Naw” the band showcases more of a Midwest post-punk sound with repetitive vocal lines over gritty guitar and drum tones. The final track “Fuck Politics” highlights the band’s most creative song writing on the release. The track begins with a solid bassline over a tingling guitar line before kicking into gear.

STICKING SETS is a promising debut from this young band. This EP is like comfort food. There is nothing extremely new or original, yet you still want to go back for more. Therefore, if you appreciate the classic 77 sound with buzzsaw guitar and grit vocals, this band is for you. Fans of classic Midwest bands such as Big Black, Effigies or Naked Raygun should also take note.

Harry and the Potters: Lumos

Informal Society: Sorry for the Mess...