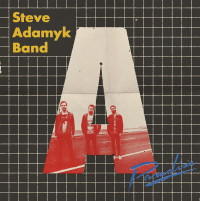 Paradise brings great pop punk songs. “The Letter” will get your feet moving as you shout along. The guitars sound like buzzsaws, the bass has a bit of a fuzzy tone, and the drums bash away like a persistent woodpecker. “In Death” kind of seems to mine “He’s A Whore” with its opening, before breaking into another Buzzcocks-esque kicker. Again, the chorus is fun as all get-out: “In death, in death, it’s not that I don’t care”. This stuff is pure pop gold wrapped in speed and fuzz and battered drums. But that’s not all. Steve Adamyk Band offers some stellar power pop in songs like “When I Was Gone”, which will remind a lot of people of Exploding Hearts with its bouncy beat, addictive singalongs, and back-and-forth vocals that won’t get out of my brain. It’s fantastic. And if you’re wanting to hear what happens when Steve Adamyk Band slow things down, “Waiting To Die Part 1” is the best answer. This song fits in nicely with a great melody and a chorus backed by blissful vocals that’ll have you singing “we’re all just waiting to die-ie, not me”. This one’s in a tight race with “The Letter” for my favorite on the record.

Trying to find criticisms, Steve Adamyk doesn’t pen much that I can’t get behind. My least favorite moment on the record is probably the closer, “The Deep End”. This song is a bit slower, maybe similar in pacing to “Waiting To Die Part 1”, until the ending minute or so. But I’m not quite as enamored with the melody on this one. It kind of reminds me of something from late ‘90’s radio, for what it’s worth.

I began writing this review thinking that I was writing up maybe the third or fourth best Steve Adamyk Band record. But listening through Paradise yet again, and remembering how absolutely jaw-dropping songs like “The Letter” and “Waiting To Die Part 1” are, I’ve reconsidered. I’m pretty sure those two songs are the two best songs I’ve heard from him. And when those two songs join forces with so much other top-shelf material, Paradise might be my favorite Steve Adamyk Band record yet.

Informal Society: Sorry for the Mess...