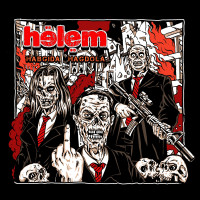 There’s no way for me to imagine what it would be like to live in Israel today, but Helem’s new album, Habgida Hagdola, gives a pretty interesting perspective. All of the tracks are sung in Hebrew, so it’s tough to say if the lyrics translate well into English. But one thing’s for sure, the music resonates loud and clear. It’s angry and passionate with a touch of melody to smooth out the grit.

Lyrically, the album leans to the far left, drawing influences from history, Marxism,  as well as modern day politics. The opening track, “The Great Betrayal”, sets the tone pretty quickly, referencing the creation of Israel and the partitioning of Palestine, an event that catapulted the world into the state of affairs we see today. Other tracks play off of this idea. “He Dreamed” is an anti-nationalist song, while the last track “Facing the War” references the negative effects of borders and walls. “Divide and Rule”, “The Red Button”, and “Zero Tolerance” all have an Orwellian feel, with lyrics about dividing the masses to keep them in line and being proud to be a traitor and choosing not to live in a world where humans are inherently evil.

Sonically, the tone matches the lyrical content perfectly. Most songs are loud, fast, and aggressive while many of the lead riffs have a metal feel. There are times where the tempo changes rapidly (“Opium”, “Zero Tolerance”), with hardcore-type breakdowns at just the right time. And like the music, the vocals match well with the lyrics. It’s tough to say what the band would sound like if they sang in English, but it’s probably safe to say that it wouldn’t be as passionate or authentic.

This album will definitely resonate in their home country. It is a heartfelt attempt at portraying what it’s like to live in such a place. I’m not sure if the music will ignite a fire in the average person. But punks should definitely appreciate the perspective that this album gives.