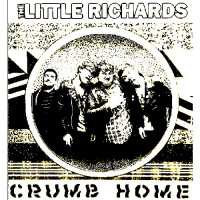 The Little Richards are a Massachusetts band that specialize in playing a Ramones-influenced style of punk. I can’t say there’s anything terribly original about what these guys do, but they write some tremendous songs and keep things fun.

Crumb Home is a 6-song EP that’s raw and fast. They match their numbskull lyrics up with some great hooks and melodies, and even some moments of cool backing vocals. And when the record gets going, they positively make it something special. “Keep It In Your Jeans” and “Slug Queen” feel like they could be an A-side/B-side of a themed single with “Jeans” sporting a surfy, bouncy pop punk vibe while verbal warnings go out to a trendy guy to stay away from the singer’s girl. “Slug Queen” has a similar pop punk vibe with a quick rhythm, catchy hooks, and some great “whoa-ohs” floating across in the background and lyrics about being a bit of a directionless slacker just wanting to hang out with his “Slug Queen”. The Little Richards Ramones-worship shines through on “J-Bone”, a funny song about some guy named J-Bone who’s only claim to fame is that he got a tooth knocked out at a Ramones concert. But for the Little Richards, that’s enough. One last standout, “My Mouth”, takes a slightly different direction with dumb-”I Like Food”-style lyrics and a changed-up rhythm section that got me thinking of Groovie Ghoulies “Island of Pogo Pogo”. All this stuff is lots of fun.

The production is maybe going to be the only real sticking point for a few. The record doesn’t sound like a rather polished pop punk record. There are buzzing microphones, feedback, reverb-drenched vocals, and maybe even a bit of what might be cassette hiss. These aspects don’t overwhelm the record at all, but may turn a few off.

That being said, the songs are fantastic fun. And for me, the production brings to mind the charms of the raw buzz of Kill The Musicians. This is how I want punk records to sound. And this all adds up to 11 minutes of goodness that makes Crumb Home a worthy record to check out.