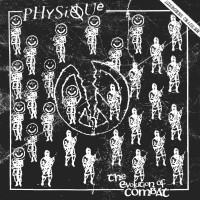 Physique waste no time through ten tracks in twelve and a half minutes on their third offering. The Evolution of Combat is described across its cover as ‘disbones crasher’ and there’s unlikely to be any two words to better encapsulate the sound of this short, brutal eruption.

The album released back in January of this year from Distort Reality, and guitarist Jake being a former member of the short-lived but legendary G.L.O.S.S. means it was widely noticed by those currently keeping up with contemporary d-beat, but The Evolution of Combat is succinct and well-enough done that it deserves the attention of plenty more of you. The four-piece whips up a noxious concoction of overly distorted speaker puckering sound where the fuzz grows on the fuzz.

The flattened assault from the drum kit sets the album off with a sound that will have you checking your speakers’ health, “Violence of Another Day” sets the tone for the very short album, and what a killer song title. Follow-up “Combat” features blasting spastic drum fills and a seven second guitar solo that’ll raise the hair on your knuckles. Through the whole damn wall of noise that is The Evolution of Combat you’re beaten over the head with their repetitive, simple, and effective songwriting, wherein Physique’s point is made efficiently over and over again in minimal words and maximal BPM’s. “No Better Way” brings the closest thing to a melody on this record, and its momentary strip-down to bass alone is a high point if not a moment to catch your breath. The aggression behind the drum set peaks on closer “Physique”, which paired with “No Better Way” makes the case that this may be a band too constrained or reined in by their medium, the two best songs on the record are also the two longest, here’s hoping they’ll be giving themselves a little more room to grow their creations next time around.