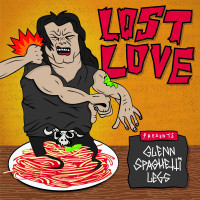 I must admit, it was the silly name and cover art that drew me to Lost Love’s latest release. It’s called Glenn Spaghetti Legs, and its cartoon art features a crude looking Glenn Danzig, with spaghetti for legs, getting punched in the face by an unknown assailant. This is no doubt in reference to the famous video clip in which Danzig was punched out by a member of the long since forgotten band, North Side Kings. ‘Spaghetti Legs’ is a term sometimes used to describe a supposed weakness you feel in your legs when you’re being arrogant. Danzig has a perceived smugness that makes people love seeing him get knocked out.

So what does Glenn Danzig have to do with Lost Love? Absolutely nothing, but I love to talk about him, and they asked for it! Lost Love is a quartet from Montreal with three LPs under their belt. I saw them live in Grand Rapids a few years ago and enjoyed them, but this is the first chance I’ve had to check out their recorded material. The two tracks on Glenn Spaghetti Legs came from the same recording session as their last full length, 2018’s Good Luck Rassco. So does it sound like Danzig, Misfits or Samhain? Absolutely not. Lost Love play a kind of jangly pop punk with sincere lyrics and lots of noodley lead guitar.

“Glenn Spaghetti Legs” is actually a break up song. Perhaps the writer is blaming his hubris for his loneliness. The B-side is another breakup song, and is my favorite of the two tracks. (Is it still called a B-side if it’s a digital only single/EP?) It’s called “Ontarien Demandé” (or “Ontario Request” for you non French speakers), and has a catchy, relatable chorus. If these are the songs that didn’t make Good Luck Rassco, it makes me think that I should really check that record out. Would Glenn Danzg approve of the way his image is being used? No way, but he shouldn’t get too uptight about it. It’s just a silly way to draw attention to a couple of worthwhile songs that might otherwise go unnoticed. If they pressed this sucker on wax, I’d buy it just for the cover!

Physique: The Evolution of Combat