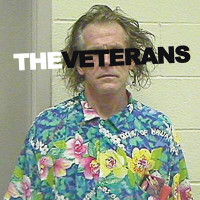 Andrea Manges and the Veterans

Italian punks the Manges have a few obvious identifiers. For one, the Ramones. They dress like Ramones. They’ve recorded with CJ Ramone. And they did a great cover of “Now I Wanna Be A Good Boy”. A second love seems to be mystery, as they tackle themes ranging from Cold War spy tales to aliens. A third motif, surfing, has led them to covers of songs like “King of the Surf” and “Surfer Girl”.

While still recording and touring with the Manges, lead singer and guitarist Andrea Manges has also released new material with a new band, the Veterans. This, their self-titled debut, leans heavily into the surf motif while not completely forgetting the Ramones nor the mystery. In doing so, they’ve put out a batch of songs that hang nicely alongside much of Don’t Back Down.

The Veterans has some pretty traditional (and pretty spectacular) punk songs. The record opens with “I Think It’s So Cool”, a sugary rush of a song. It’s catchy in all the right ways, with an earworm melody, tasteful lead guitar, and perfect back-and-forth backing vocals. “Dance, Darling, Dance” is pop punk perfection, a quick blast through catchy hooks and melody, harmonizing backing vocals, and all wrapped up in a minute and a half. This one might be my favorite on the record.

The Veterans also remembers to bring in the mystery by way of “Easter Island UFO”. This one kicks in with quite a bit of pace and some nice sci-fi and surf-treated guitar bits. “UFO” wouldn’t sound out of place on a Groovie Ghoulies record and the whole campy extraterrestrial lyrical thing has me thinking back to the first I heard from the Rezillos.

Finally, The Veterans also brings the surf to this punk party. “Sick Vibrations” is a straightforward pop punk nugget with a great melody and some tambourine thrown in at the perfect times. When the bass and guitar drops out, you’ll hear a 60’s surf singalong closely mimicking the Beach Boys “Good Vibrations”. Closing out the record, “The Tiki Art Show” opens with a guitar seemingly ripped straight from the Ramones “The KKK Took My Baby Away”. When it breaks into its surf-pop chorus of “I will always come back, back to you, it’s where I belong”, you’ll likely be hooked. The Veterans even play nice with “Surfer’s Holiday”, a fantastic send-up of the Annette Funicello song from the 1964 movie Muscle Beach Party. Catchy and full of pace, it’s another terrific moment on the record.

Going through The Veterans, there are a couple of slight moments. But even those aren’t egregious. Instead, they come off as playful, maybe conveying the innocence of the surf music of a bygone era. It all works in the context of this beach party record. For those who like their punk music full of hooks, singalongs, and good times, one need not look any further than The Veterans.