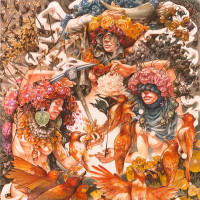 There is so much going on in the entirety of the album, that lesser bands would get lost, but that simply doesn’t happen here. Of course, lead singer and de facto band leader John Baizley gives us a few straightforward metal songs like “Front Toward Enemy” and “Throw Me an Anchor.” These songs, and a few others, have some blazing guitar riffs, chaotic drumming, and a soaring chorus. It’s what Baroness’ rocking has more or less sounded like in recent years, and it still works really well. Gold & Grey is the band’s first record with new guitarist Gina Gleason, who steps in effortlessly in instrumentation, but also adds a wonderful backing vocal harmony to a handful of songs as well.

Beyond the rocking, of which there is plenty, Gold & Grey also challenges the listener pretty early on. There are six separate instrumental interludes throughout the album, all of which differ sonically. There are keys, light acoustic guitars, fuzzy riffs over drums. In writing it may seem out of place in a Baroness record, but these instrumentals provide a fluidity to the album as a whole; an album that changes pretty drastically from start to finish.

“I’d Do Anything” starts with a deep piano piece and slow guitar strums. An acoustic guitar fades in after a while. Baizley is wailing here in a terrifically self-reflective song, that is again enhanced thoroughly by Gleason’s back in vocals. The track also begins a shift in the record, a shift that can’t really be placed in a genre.

The songs on the second half of the record can be loud like “Broken Halo,” but they can also be more like “Cold-Blooded Angels.” On the latter, there is a slow, almost shoe-gaze intro that lingers and creates an atmosphere unlike most other songs on the record. It too, goes into a heavier sound in the latter part of the record, but ends with a lightly picked guitar part, and a programmed outro. “Borderlines” veers into prog rock at times while also being a very cool, soaring rock song. “Pale Sun” closes the record with a groove metal beat, but also a choral harmony. There are no two songs that sound alike here. Sure, there’s an overarching sound that Baroness is now known for, but then there’s synths, programming, and experimental sounds thrown in for good measure.

So really, to try and put Gold & Grey into a single genre is a futile exercise. Sure, it’s metal, but the band has clearly moved on from being just one sound. On previous records, the band has always had a song or two break the mold of said record. But this, this is different. It’s a fun, challenging listen that will continue to grow the more it gets spun. And most importantly, it fucking rocks.