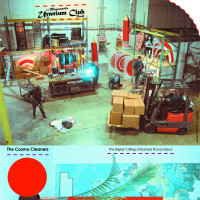 The Cosmo Cleaners: The Higher Calling of Business Provocateurs (2019)

The first time I heard Uranium Club’s new album, Cosmo Cleaners, it invoked immediate memories of the first time I heard Minutemen. That’s not a band’s name I use, for the sake of comparison lightly. They likely wouldn’t have achieved the pop culture icon status they did without MTV’s Jackass, but they are every bit as influential and vital to the punk scene as Dead Kennedys, Minor Threat, X, Misfits, or Descendants. While there are a lot of musical similarities between Uranium Club and Minutemen, specifically What Makes a Man Start Fires and Double Nickels on the Dime, the thing that reminded me of them the most was the feel. Which, is a weird thing to say … that one band captures the spirit of another band. But in addition to their musical similarities there is just this tight knit looseness in the band. Like something you’d get from a jazz trio more readily than any band in the rock genre.

Opening with the driving bass of “Flashback Arrestor” this album grabs your attention almost immediately and demands to keep it. With a vocal style that recalls Ex, early Talking Heads, the previously mentioned Minutemen, and a short lived 80’s band from Ohio called Great Plains. While the lyrics are far from conventional for 21st century punk rock, they would have been at home on any alternative album released in the late 1980’s or early 1990’s. That while they’re not utter nonsense, they also understand how brining a unique quirkiness to the table can be beneficial in helping establish your band’s identity.

Elsewhere on the album, the band executes the use of captured sound perfectly on the song “Grease Monkey.” The use of car noises add to the halfway between surf and funk feel of the guitar to create a sound that makes the song feel like it’s from another era, an era where songs about cars and girls weren’t just standard rock n’ roll paint by number subject matter.

As previously mentioned, the vocals on this album are somewhere in that space between being sung and spoken. This works, to its greatest success, on “Michael’s Soliloquy” which splits the album down the middle with something that maintains the musical feel on the rest of the album while invoking anti-music industry songs like Zappa’s “Joe’s Garage,” Dead Kennedys’ “Pull My Strings,” and Pink Floyd’s “Have a Cigar.” It tells a story, albeit one we’ve heard numerous times by many bands, but adds their unique brand of humor to keep you interested in their version of that story.

All in all, this is good album that borders on being great. Musically, everyone in this band can play and they’re a tight band without ever sounding to rehearsed. That sound is so important in an era where too many bands are using computer software to make their songs sound perfect as opposed to human. As good as this is, I want to see where this band goes next. I feel like they’re an album or two away from doing something that’s going to make the whole scene take notice.