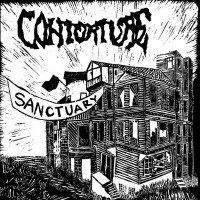 Contorture bring the politics of 2019 to d-beat. Gone are the played out and tired tropes of nuclear destruction, and in their place the struggles that define this generation. A genre so rigidly conformist and guarded against deviations to its construct sees a lyrical and thematic update long overdue in a fresh buzzsaw through a familiar structure compliments of the warrior women of Gothenburg that comprise Contorture on their second LP, Sanctuary. Centered on a theme of feminism this record comes armed to the teeth with the fury of fuzz, the numbness of noise, and the absolute fucking empowerment of their distortion.

By the second track, “Witches”, it’s clear this is not a call for gender equality or a ‘kumbaya’, sort of affair, this is a declaration of war. Presented on Sanctuary is an entire platform, a spread of ideas interspersed with the womanocentric messaging, exploring animal rights on “Killer Look”, our endangerment of our planet on “Plastic Wasteland”, “Black Water”, and “Locust”, confronting the currents of white supremacy on “Hating in Plain Sight”, and white privilege, on “Integration”. The current worldwide crisis in attitudes toward refugees and immigration rear up in “Cut Every Wire” and “No Crisis but Law”, and we even find time for a couple classic love letters to the punk scene on “Love in a Hopeless Place” and “128(A)”.

The lyrical content and themes make this record unique, but make no bones about it, this is a fuzzed-the-fuck-out aural assault d-beat album. While what is achieved on this record is honest art and fresh confrontationalism, it’s a noisy, brutish affair with a runtime particularly long for the genre; it’s an ugly expression and a heaping helping of it. If you don’t like d-beat, you won’t like this record just because it’s about issues that you care about. And as a fan of the sound and the genre, there are a few minor criticisms to be meted out amongst the plentiful points for praise. Not uncommon for the genre, but I’m looking for the bass lines often and coming up short. The runtime does get tiring, most of these songs are much more digestible in shorter bursts than as the nineteenth and twentieth minute of this entire playthrough. It is a very traditional soundscape of the style, nothing close to innovative happens within the instrumentation, and nothing you couldn’t have found sonically on albums released over thirty years ago.

The meat on this beast is the message. Regardless of style preference in your punk, “Killer Look” is just a flat-out great song. “Plastic Wasteland” is real good and stands out among the tracklisting, in no small part thanks to the shared vocal duty, adding a textural variance that’s appreciated in the ears. There is a very real, firmly established, and for the band members, hard earned weightiness to this record, nothing feels like garnish, and every drop of sweat and strained vocal cord is toward a pointed effect and a direct message. Tracks like “First World Problems” and “Commitment Issues” coalesce a great timelessness with the inherent urgency of todays injustice. The drumming on this album is always tight from top to bottom. This is an excellent work in the classic tradition of the genre better developed through much more involved and thoughtful lyric craft and messaging than you might expect. This is a call for justice, this is a call to arms, and over the ensuing sixteen tracks that follow “Witches”, they live up to its vitriol and impressively make their case to justify its calls for violence.