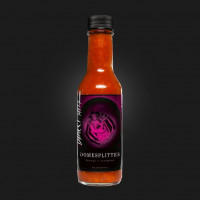 A few weeks ago, I was fortunate enough to go to Dummerfest 2019 in Milwaukee. One of the vendors selling their wares at this wonderful little one day festival was Soothsayer Hot Sauce. The Chicago based company is best known for making hot sauces for various punk bands. The Flatliners, Typesetter, Jeff Rosenstock and Turnspit have all been honored with their flaming creations. They had maybe 8 or 10 different sauces with them to sample. I went down the line, from mildest to hottest, and tried them all. Despite the fact that my taste buds were annihilated, I really enjoyed the experience. I decided to pick up a bottle of the sauce inspired by our Dummerfest hosts, Direct Hit. Domesplitter shares its name with one of the band’s most popular albums, and was about in the middle of the samples heatwise.

My first impression was that it looked pretty cool. Domesplitter comes in a standard 5 ounce hot sauce bottle, but the label is black and dark pink with some kind of skull spider thing on it. It features fresno and scorpion peppers, and only six simple ingredients in total. (In other words, there’s no high fructose corn syrup or other garbage fillers.) My second impression was that this stuff is HOT. Certainly hotter than I could have fully appreciated after a dozen beers at Dummerfest. Some milder hot sauces can almost be eaten with chips like a potent salsa, but not this. It is not one of those flavor enhancing hot sauces that adds just a bit of kick. Domesplitter brings the heat.

I like to put hot sauce on almost anything, so first I tried it on a humble beef hot dog. I may have overdone it a bit, because I couldn’t taste the actual hot dog, and I burned the shit out of my mouth. On a more flavorful cheeseburger, it was really good. It also made the tongue dance in a good way when sopped up with a chicken quesadilla. (My spicy food loving friend liked it too.) Domesplitter can even make a simple ham, cheese and lettuce sandwich come to life. The cool lettuce offsets the heat a bit. The flavor of the sauce is good, and is considered Louisiana style. (I regret I was unable to have any Cajun food during the testing process.) It’s got a more unique flavor than the more popular, widely available Louisiana style sauces.

The ultimate test was tacos, and Domesplitter excelled. Let’s face it, a good hot sauce has to pair well with Mexican food. It worked well with traditional corn tortillas and regular soft shells. When I tried it with a spicy Dorito type hard shell, (yes, I know they’re not authentic), it was almost too hot. I recommend Domesplitter, (and Soothsayer in general), but with one warning - use only in small quantities. Like most artisanal foods, it doesn’t come cheap, but a little Domesplitter goes a long way. If you overdo it, you will know it. It will be the only thing you will taste, and it will hurt you. They could have just as easily called it Facemelter.