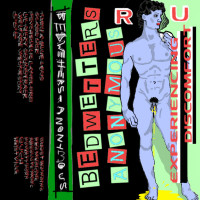 From the start of R.U. EXPERIENCING DISCOMFORT (?), you can tell that Bedwetters Anonymous love having fun with what they do. The guitars, bass and drums playfully interact with one another and aren’t afraid to change up their arrangements in order to frame the lyrics perfectly. The lyrics put a unique, humorous spin on heavier issues, such as poverty and panic while also focusing on lighter issues like the Little Nicky soundtrack and dicks. This patchwork quilt effect makes R.U. EXPERIENCING DISCOMFORT (?) feel like the best kind of organized chaos that is comforting even with its frantic energy.

Bedwetters Anonymous' “Absolute Panic” is easily one of the highlights of R.U. EXPERIENCING DISCOMFORT (?). It feels like the song and the singer could fall apart at any minute, personifying the feeling of immense, unshakable panic. It fills you will nervous energy that makes you feel like you need to move, like a human pinball. The lyrics poke fun at feeling panicked, making you stop and think about what good feeling panicked actually does.

Bedwetters Anonymous are a talented band who can play well together and sound like they have a blast working together. R.U. EXPERIENCING DISCOMFORT (?) shows off many different styles and arrangements that come together to create a unique blend of hard-hitting social commentary and humour. With that said, the album has some issues. Sometimes it is very hard to make out what the singer is saying which can make it hard to understand some of the humour being presented. The opening track, “Thru a Blue Lens” falls flat when compared to other songs on the album as well. It doesn’t have the life that the other tracks have, and the lyrics are very hard to hear. These factors make it a solid 3/5.

Overall, R.U. EXPERIENCING DISCOMFORT (?) by Bedwetters Anonymous is a hilarious, high energy ride that goes by in a flash.

Matt Pless: Catch Me if you Can