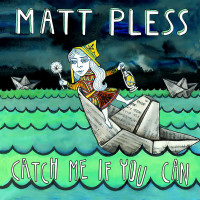 It was about 18 months ago when I first stumbled upon the current Folk Punk scene, that I have since been engrossed with, and since that fateful day, I have been on a never ending (it seems) path of discovery, with new artists rearing their head daily. Some are great. Others, not as great. Of the greats, Matt Pless has been remarkably exciting to have discovered. A man, a guitar, and great lyrics. That’s all one really needs to make a great record, like Catch Me if You Can.

The album starts with possibly my favorite track, though I keep flip-flopping, in “When the Frayed Wind Blows”. The track is a personal diatribe regarding the world at large, from both a political and personal stance. “If it starts with an explosion / Do you end it with a bang? / First the whistles start a-blowin' / Then the guilty finally hang” blasts out to start album, and the lyrics don’t decline throughout the song, or the album, and they are only slightly better than his work on guitar, which puts them both in the category of musical excellence. Like he is apt to do, he attempts to see from both sides of the fence, and ends the song questioning whether those who are trying to change the world will eventually be the same oligarchs that were overthrown by the righteous.

He follows this speedy exploration of the world at large, with a slower, more personal track, which sets the tone for the album as a whole. Constantly moving from aggressive warnings of a dim future and explorations of the human psyche, to personal, sometimes even romantic, ballads. He does so perfectly, where the listener seems to ebb and flow with the rhythm of the record, and leaves no opportunity for the listener to become bored with repetitive or reused material, all while showcasing a song writing ability that is incomparable to any current artist.

My favorite track, when I’m flopping from “Frayed Wind” has got to be “Shots Fired”. Much like the first track, it is a deep dive into the mass shooting and police brutality problems we’ve been plagued with for decades now. Each verse, until the last, details a particular shooting, with factual reflections on the events that occurred, with a chorus that has slightly changed lyrics each time, to make it a more effective reflection of the particular incident. He ends it with a question on what is the right way to fix the problem, with lyrics that ensure thought is being provoked: “It's a matter of opinion / If it's wrong or right / It depends, cause' they can end / Or they can save a life” and “So think it through, this much is true / Whatever you decide / You're bound to find a paradox / In every paradigm”.

This record was one that has been revolving in my car, near everywhere I drive for quite some time now. Insanely brilliant lyrics, blended with poppy, catchy acoustic guitar, with the grit and aggression of punk, somehow come together to make a near perfect album.