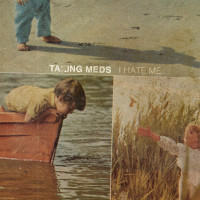 Taking Meds are an interesting band that was originally formed in Rochester, NY in 2012. The band boasts members of active prog influenced pop-punk band Such Gold. I would hesitate to use the term “side project”, but Taking Meds seem to offer an outlet for the ongoing progressive rock influence heard on the more recent Such Gold releases.

I Hate Me, is Taking Meds most recent LP for Near Mint records, and provides a significantly more comprehensive reflection of the members’ love of raw progressive indie rock. Taking Meds make the style changes work nicely, easily moving back and forth from droning indie rock, quick and odd time changes and the occasional screamed verse.

Progressive and mathy elements were evident throughout Such Gold’s last release, but are prominently placed on display throughout I Hate Me. The most obvious references I can make regarding I Hate Me is a combination of Minus The Bear, with some Shellac and At The Drive-In fuzz for good measure. The band manage to seamlessly work in aggressive moments heard in tracks “Big Fish” and title track “I Hate Me” and quickly transition to reverb heavy alternative jams like “Stranger Who Stares” and “The Problem”. This likely goes without saying, but I am going to say it anyway, the musicianship showcased within I Hate Me is nothing short of impressive – the members make the difficult time changes and transitions seem easy and natural.

I will admit, I Hate Me did not initially land for me. After my initial listen, I shelved the record for a while, which worked in my favor. On my second round with the album it all started to click and make a bit more sense, which just increased with each successive listen. The band takes the currently popular 90’s alternative wave and has done something quite interesting with it. Taking Meds is not necessarily easy to listen to, but it’s worth it. The harmonies and hooks placed throughout the mathy and organized chaos really shine after repeated listens.

If you feel like trying something a little different, but still familiar, look no further than I Hate Me. It is a creative and seemingly cathartic effort from a band of talented individuals. FFO: Shellac, Fugazi, Minus The Bear, Citizen, etc..

Glitterer: Looking Through the Shades