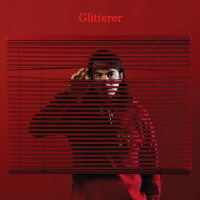 Some will label Looking Through the Shades an art project; they’ll say it’s poetry set to a slew of experimental sounds, synths, and a drum machine. Some will even suggest that it’s just a derivative or an extension of Hyperview.

Not-so-simply put, the new record from Ned Russin under his solo moniker, Glitterer, is like a lucid dream straight out of a David Lynch sequence. It’s an amalgamation of curiosity and conversations one has with themselves in a state of unconsciousness. It’s all about wonder and the outward expression of deep inner thoughts.

There’s really no songs “to someone” or “about something” in particular here. Other than “Two,” a spacey, bass-driven track about the bond with his twin brother, Ben, (and fellow Title Fight member,) it’s as if there’s no theme here, just an accumulation of reflections straight from a hypnopompic state.

It’s different for sure. If you were previously unfamiliar with Glitterer, it undoubtedly takes some time to absorb. It’s a far cry from what made Title Fight one of the most important bands of the decade, but the sound hits on so many levels. Looking Through the Shades is a quick trip, clocking in at just over 20 minutes, resulting in a unique experience and not just a collection of songs.

After a few spins, it begins to open up - and just like fine wine, the longer it ages, the more special it becomes. With each listen, it begins to breathe, exhuming hints of Bleach-era Nirvana, (“The Race,”) with a bit of a Passion Pit finish, (“Destiny.”) Other influences become apparent throughout, whether consciously or not, but there’s still the underlying layer of modern punk aesthetics and melodic hardcore, particularly in “Put Ourselves Away,” and the latter half of “1001.”

I’m really interested to see how far Ned goes with this. The Prince of Hardcore won’t lose any fans here, and will definitely gain pockets of new followers exposing them to Title Fight and the family tree of their own and associated projects.

What I’m most intrigued about is how Glitterer will evolve as a live act. In some earlier performances, it’s clear there’s a bit of awkwardness that needs to be worked out – and understandably so. Going from bass-in-hand and part of a collective unit who have delivered such energy and adrenaline to punk and hardcore kids across the globe, becoming a solo “artist” must be a difficult transition. Just like Looking Through the Shades, Glitterer needs to be an experience, opening others up to their own self-discovery and mental explorations.

Taking Meds: I Hate Me