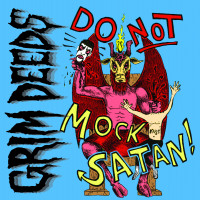 Grim Deeds is an interesting character. Apparently, he teaches. He has some cool interviews on his blog with people like Kody Templeman, Dan Vapid, Dr. Frank, Andrea Manges, Mikey Erg, and Intruder Blue. And he makes all sorts of great music. He records in classrooms, his living room, a garage. He even records in his Honda. And he releases new music constantly.

Do Not Mock Satan is maybe my favorite of his. This was the first Grim Deeds I gave a try, and I pretty much picked it because of the cover. That, and because it has a song called “Glenn the Heavy Metal Custodian”. At thirty-one songs and fifty-plus minutes, this is a huge pop punk record. I struggle with attention span sometimes, but Do Not Mock Satan mostly keeps me checked in.

Whether through pace changes, shifts from jangly guitars to chainsaw guitars, or unexpected forays into metal shredding, Deeds is typically great at keeping listeners on their toes. Do Not Mock Satan is mostly a pop punk record. Songs like “Breakfast of Champions”, Sophie the Sociopath”, and “Dead Inside” are pretty typical pop punk songs, each featuring a snappy pace, simple guitar riffs that sink in, and nice simple guitar leads. They are catchy as all hell and even sport some nice backing vocals that would help them fit nicely on any early ‘90’s Lookout comp. “Germaphobic” could fit alongside anything on Boogadaboogadaboogada. It’s ridiculous, and great. The aforementioned “Glenn the Heavy Metal Custodian” is maybe the standout. Over some simple and hooky Ramones guitar, Deeds sings a stupid great melody: “They call him Glenn, the heavy metal custodian, he’s listening to Slayer in the halls; They call him Glenn, the heavy metal custodian, and he’s the coolest janitor of all”.

Even with all of this great and speedy pop punk, Deeds knows how to change things up. He tries his hand at topical power pop on opener “Before the Internet”, a catchy pop song with an addictive lead guitar line. “Long Gone” is similar, with guitars that are a bit more jangly and a fun bounce in the beat, a kind of strange remnant from 1980’s college rock. “John Kokkonakis (Part 2)” is a bouncy song. It’s got no twang, no dead dogs nor old trucks, and no slide guitar, but I’ll be damned if something about it doesn’t feel like Deeds stab at a country song. I like it. He even throws in a handful of covers, including a blistering heavy metal take on Mr. T Experience’s “Sackcloth and Ashes”. No real reverence for the original (a favorite of mine), but it’s amusing. As Do Not Mock Satan closes, Deeds even tries out an acoustic song with some sociopolitical commentary. “White Power Picnic”, feels like a campfire singalong mocking the ignorance of racism and the losing fight racists are waging. These various forays help the record avoid the redundancy of breakneck pop punk.

Do Not Mock Satan is a fun and cool record, and those who like catchy and raw pop punk with a bit of variety will likely find something here to draw them in. I like it a lot. And if you like this, you’re not likely to run out of new music from him anytime soon.