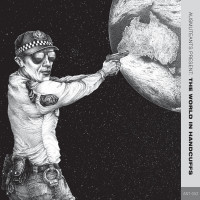 I want to talk about the problems I have with an album I really enjoy (and admit that they may be totally unfair) as an American reviewing an Australian political message. It’s the newest album from Melbourne’s Ausmuteants, a concept album about a day in the life of a police officer, Ausmuteants’ Present: The World in Handcuffs.

A punk band’s concept album told from the caricature viewpoint of a cop. It’s obviously going to be an unflattering narrative, and this one unfurls with a fair dose of humor right from the get-go with “Your Favorite Cop”, and from there within every other track, and especially “Officer Steve”, the band articulates an image of the typical cop as a joke, an unknowingly bumbling, dim, insecure meathead still searching for approval from some clique, coach, or parent. My issue with this ten-track undressing of a boy-in-blue is the levity bestowed upon the archetype. The capitol-C Cop in punk lore is a long-standing and pervasive villain of the genre, and not one fabricated for effect. Outside of St. Patrick’s Day in Suffolk County, you don’t see a lot of punks and cops getting chummy. The violence and harassment of punks, the scene, and other freak kids on their own turf, at their own venues, and in their personal lives on the streets is well documented and ingrained into the fabric of the genre, but sure as any punk reading this can tell you what ACAB means, here we’re faced with a much more A.C.A.Jocks outlook that depicts a powerful entity armed with lethal force making and defending atrocious headlines across the nation as the product of an arrested development and overzealousness to do enough good so-as to earn the respect of their peers.

The real tragedy here is the missed opportunity for an exploration of depth or a condemnation of substance. This approach ignores any systemic or discriminatory causation and minimizes or trivializes the threat this particular dufus poses to the scene and some of its old-timer members historically, whereas contemporarily where there is criticism of the internal attitudes of the force it’s spiritually scored not with the Imperial Death March but with the Benny Hill theme. This enmity played out like rivalry reduces Laurence Powell and Stacey Koon to Boris and Natasha, and there was enough room and talent here, on a record solely dedicated to this exploration, that I’m left feeling short-changed on repeat listens. Some of this may just be getting lost in translation; look, this is an Australian band and I’m reviewing it through an American lens. There are skits between these tracks not included in the digital release they kicked out here, maybe therein is some missing heft, but I can only judge this on what’s presented.

This is a good album, I want to talk about that, too. Ausmuteants bring their killer keys to the forefront on near every one of these songs, especially effective on “World in Handcuffs”. As a cohesive narrative or exercise in character building the band really has to be happy with themselves. There’s a garage edge to the band that they sure haven’t lost in the three years since their last release. If I’m categorizing it I’m going to call it melody-driven not-pop-punk. “Right to Force” is a strong center piece and mission statement for the protagonist, riding an ever-moving marching rhythm that’s coming for you where you hide. “Born into the Badge”, “They Want to be Caught”, and “Just Like You” handle a great lift of character building but only serve as satire on par with repeating exactly what your big brother just said verbatim but in a stupid voice, like, ‘get it? that’s what you sound like.’ “Forever Cops” does reach into a critical depth you would hope for, however briefly, and gets condemnatory with ‘hands up, we’ll still shoot’. This is a good album, a very different take and a unique premise, but as closer “Killzone” cleanly epitomizes, it’s an interesting concept with a lot of musical excitement, but none of the weight an American audience would hope for.

Devo: Something Else For Everybody