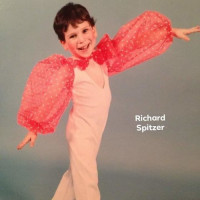 The most obvious joke on Richard Spitzer, an album of stripped-down, sometimes guitar-based, sometimes piano-based singer-songwritering, is “Synthesizer.” You don’t need to know that Spizter was a bounce-around keyboard player in rock bands, nor that he released a fair amount of synth-pop under the moniker Loveskills, for the joke to land; the album’s opening track is a strummy, stripped-down, defiantly analog song about how rad synthesizers are. You hear that, then you hear “Russia Collusion” - which makes a strong case that “Russia collusion” is the “Thanks, Obama” of the late teens - and you think you know what kind of album you’re getting.

Turns out, these two songs are a headfake for the real work Spitzer is trying to do. Namely, dismantling the capitalist system and replacing it with a socialist utopia, and also finding true love. Pretty heavy ask for anyone, let alone a dude who plays guitar and sings like a next-door version of Elliott Smith.

You can’t accuse Spitzer of faking it. The bare-bones singer-songwriter context of the record makes it feel like Spitzer is in the room, and his delivery is so sincere as to border on desperate at times. “Ex Friends” is probably the most stark example of this idea, what with Spitzer pleading that one “don’t believe it” when faced with whatever agenda is being pushed by media, mainstream or otherwise. It’s “wake up, sheeple” by someone on their hands and knees. Same goes for “Yellow Vested,” a song which takes its title from Yellow Vest movement in France and includes the lyrics “Marxist revolution” in its chorus.

In that way, Richard Spitzer shares the politics and economy (11 songs, all under three minutes, album runs in the time it takes to watch an episode of Jeopardy) of punk music, if not the sonic palette or obvious ferocity. It’s not wall-to-wall politics, either. Songs like “Girlfriend” and “Sweet Surrender” are straightforward, lovelorn guitar songs about, uh, having a girlfriend and surrendering to something you’re not totally upset to be surrendering to. The through-line here, connecting the political aspirations with the more personal, is the longing. “Won’t You Be Mine” isn’t just an album highlight, it’s a statement of purpose.

It’s tempting to throw this album into the “Coffee House / Rainy Sunday” playlist and be done with it, but that would diminish the ground that Spitzer managers to cover with his stripped down approach. “Won’t You Be Mine” and “Wandering Star” are the furthest afield, with the former sounding like a garage-rock stomper and the latter approaching musical theater. Even within more traditional, straightforward arrangements, Spitzer prefers to drive his guitar. It’s quiet, but not languid.

Still, the preferred headline here, if one interprets the press language in the run-up to the release, is how Richard Spitzer fulfills its goal of documenting “a man and his acoustic guitar on this Marxist mission to ‘unite and enlighten.’” The answer will likely depend on your tolerance for lyrics like “When will industry die… / when will health insurance be free,” but the package is appeal and the writing clever enough to please, at least on a superficial level.

Ausmuteants: Present: The World in Handcuffs