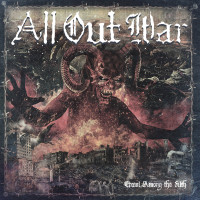 In an age seemingly dominated by metallic hardcore bands both new and old, the older acts can be hit or miss. Some have never retired, pushing through since the 80s or early 90s; perhaps no longer at their peak, but the steadiness of their career has kept them polished. Others have returned after long absences (for any number of reasons), only to come across as stale, tired, flat.

Then there’s New York’s All Out War. Only officially calling it quits for a few years in the mid aughts, All Out War have kept their place in the conversation as one of the sub genre’s originators and most consistent acts. Known for their brutalist approach in their recordings and their chaotic, riot inducing live shows, All Out War add another jagged, bloodied notch to their belt; their seventh full length entitled Crawl Among the Filth.

Without a moments respite upon pushing ‘play’, “Divine Isolation” is already at full force. The opening track, along with closer “Despised Regime”, create a nice preface/prologue dynamic. Both are longer than most tracks in between, and both are similar in their adventurous craftiness.

The chapters between each manage to tell their own story, even with very few ring-outs or fade-ins to signal the end of one or beginning of the next. There are far more linear cuts than the aforementioned, of course. But there is still a sustaining lack of any sense of flatness, and that’s a difficult accomplishment.

“Judas Always Crawls” is a straightforward blast of the kind of blasphemous metal All Out War has been dishing out since 1991. Tracks like “What Was Becomes Undone”, “Suffocate and Subjugate”, and “Gehenna Lights Eternal” lean more towards a classic hardcore sound, in which the dueling vocalists are best showcased. The modern political climate is scorned rightfully and barbarically on the circle pit anthem “Drink the Plague”.

All Out War’s lyrical content has always been a high point of theirs, especially if you’re a fan of the dark, morbid, and intolerably inhumane. You know...reality. Expect plenty more blasphemy (“Contempt Be Thy Faith”), abuse of power, especially by religious groups (“Septic Infestation”) and of course, human suffering in general (“Hanging On the Wire”).

Always insistent upon their music being more than just ‘heavy for the sake of being heavy’, All Out War have what many metallic hardcore bands lack: depth. Sure, Crawl Among the Filth is an unrelenting juggernaut from start to finish. But one thing it isn’t, is monotonous. There is a depth to these tracks, there is soul. And there is plenty of that all too reclusive trait, character.