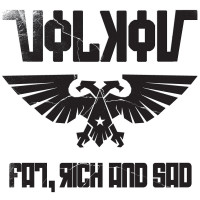 The Volkov story begins in 2011 in Mother “Russia” This pop-punk outfit has previously released a debut 7” as well as a split 7” with Mega from Italy on Mom’s Basement Records. For this debut full length release, Volkov brings us on a Ramones-filled journey full of humor and downstrokes. One interesting tidbit to point out before review is the fact that the album bears two different titles. The LP is titled SAD, RICH and FAT. The CD bears the name SNOWBALL FIGHTS AND HOCKEY STICKS.

The album’s opener “Autumn In Bijsk” is a steady rocker that lets you know what you are in for. The vocals remind me most of Andrea from Italy’s Manges. Very interesting sound from a “Russian” band! Next up is “Guitar Addict” that kicks off with a 90’s Lookout-Records style guitar lead. One observation of Volkov is their knack for showcasing their talents. Throughout the album, and this song in particular, are subtle moments where the guitar drops, and the bass takes the lead. “Raining Shit” is a standout track on Side A. This track showcases the grittier side of pop punk, both musically and lyrically. Solid backing vocals throughout reminding us of bands such as Screeching Weasel and the Vindictives. Volkov pays homage to Weasel by finishing the track with the same high pitched “Tonight” as previously heard on “I’m Gonna Strangle You.” The band flirts with a more 90’s alt-rock sound on “Rostov On The Don” to favorable results. The next three tracks “Not For You”, “Two Headed Eagle” and “Shy Guy” are straight forward Ramonescore rockers which will appeal to the pickiest pop-punk fans. “Two Headed Eagle” showcases the bassists solid basslines throughout. On “The Russian Woodpecker” Volkov showcases their ability to write catchy guitar leads and hooks. “96 Me” highlights powerful backing vocals. Again, Volkov pays homage to a 90’s pop punk band during the outro. The band sings Mr T Experience’s “Ba Ba Ba Ba Ba” as the song ends. The album finishes strong with “All By Myself”

Volkov has delivered a solid and impressive debut LP. This band has crafted the perfect blend of 90’s era Lookout-Records pop-punk with European pop-punk such as Manges and the Apers. This band may not be reinventing the wheel, and that is fine. Why fix what isn’t broke?

Sanction: Broken In Refraction
Go to the review index