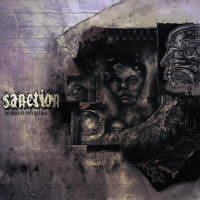 Nu-metal was a hard thing to pin down. It wasn’t metal enough for the metalheads. It was too mainstream for the punks. College radio turned up its nose. Even still, it was dangerous enough for parents to question its moral value, and gave a generation of youngsters their first taste of a world left of the dial…if only by a touch.

For many of us that lived through it the first time, the idea of nu-metal ever coming back was laughable- not to mention completely unnecessary- just a few short years ago. But on their sophomore album Broken In Refraction, Sanction (note the spelling) join such contemporaries as Vein and Counterparts to update this often mocked, probably never completely understood, genre.

The Long Island quintet clearly has hardcore roots, while heavily favoring the much more metallic end of that spectrum. But it’s those 90s-00s influences that make this album stand out. The heavily compressed guitars, the sprinklings of drum machine blast-beats, the narrations on the intro and outro that are filtered down to the point of being indiscernible, the mid-song pauses filled by just a few seconds of ominous soundscapes, the whiplash panning. What seemed like such kitsch to whatever type of purist you were 20 years ago, suddenly all makes sense.

Broken In Refraction is no throwback album. Sanction are simply using these tools to their advantage, and finally putting them to proper use. There is no corny factor here, and, goodness knows, no whiff of radio playability. The vocals are consistently blood-curdling; the drums, even at their most gated, pummel without mercy. A great deal of production fun was had with the dual guitars, and as they grind away nearly frictionless, the way they are placed into the space around them will make you glad you opted for those expensive headphones.

A dark, heavy album full of unsettling and menacing wordplay, Broken In Refraction may make use of some vintage production from an era we all hoped would be forever bygone. But the way it’s retrofitted to blend in with the energy and passion of today’s metal, proves you can teach a new dog old tricks.

No Turning Back: Destroy