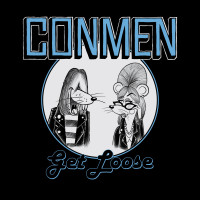 Conmen have a vivid, distinct perspective on the utility and performance of punk music, exercised time and again on Get Loose. The idea is this: first and foremost, punk should be party music. If you’re looking for a thesis, the stand-out line from “Don’t Wanna Hear Ya” will do in a pinch: “Don’t wanna hear your bullshit / I just wanna have some fun.”

The band uses the template of Ramones-worshiping pop-punk to make its thesis, occupying a spiritually (and occasionally sonicly) similar space as touchstones like Teenage Bottlerocket and Screeching Weasel. There are notes of garage-rock scattered throughout the album - the occasionally guitar solo that matches the vocal melody, the errant song with maybe six chords instead of four - but they’re exceptions, not the rule. This is a decidedly East Coast affair, save for a sniff of Midwestern-style on early album highlight “Nice Nice.”

Using first-wave American punk as a canvas, an idea that’s nearly 45 years old in 2019, is a tricky thing. Because the baseline is so populist, success or failure lay in the details; things like original harmonies, catchy hooks, memorable moments, and waterproof tightness become the coin of the realm. On these marks, the band succeeds. “Dirty Mind” doubles as the album’s catchiest song and a fine addition to the noble cannon of “songs about hornieness.” The title track is the kind of speedy ripper that could fly off the rails in the hands of a lesser band. Conmen prove themselves reliable stewards of the form, if not outright innovators.

That said, Get Loose’s big idea - what if Andrew WK recorded Too Tough To Die - is its own grand reward. I cannot recall the last time I hear an album this obsessed with dancing (“You Were Dancing,” “Too Tough to Dance”), specifically taking one’s sweetheart out for a dance (“Gimme the Look,” “Maybe”). The record shines a light on an aspect of punk that’s too often passed over, the idea that this music is fun, and that classic fun, 50s-style fun, can sit right next to it alongside the oeuvre’s seedier, darker elements.

Get Loose is a record for dirtbags to listen to when they go on dates. It’s the sound of leather jackets pressing together to do the jitterbug. It’s obsession with the iconography and palate of a foregone era makes it feel at times like a sleazy little brother to the Gaslight Anthem aesthetic. It feels a touch out of time in 2019, maybe, but that throwback element only makes it stand out further.

Dollar Signs: This Will Haunt Me