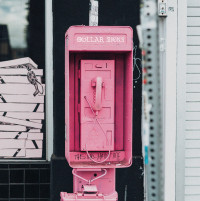 Tasty, swinging pop-punk riffage form Charlotte, North Carolina! Upbeat tempos, singalong chants and chorus’, small short bursts of skillfully directed energy begging to be more than interludes (“Ugghhhh” is the most fun you can cram into a 50 second song), and a cohesive mission statement from the self-described ‘Student-Loan Core’ outfit. Dollar Signs’ second full-length, This Will Haunt Me doesn’t showcase any really incredible talent or prodigious songwriting, but goddamn, I just keep coming back to it. These aren’t particularly great songs by most objective standards, but they’re songs that I find myself wanting to hear over and over again, which must make them pretty good tracks, right? In my book, even with all those qualifiers, that’s a pretty good compliment for any band breaking out.

This Will Haunt Me is terrifically relatable to punk fans of a certain age bracket; this album feels like a collection of real conversations I’ve had with my friends in their backyards and garages turned into pop-punk songs. Present-day Pop-Punk is dominated by themes of millennial (im)maturity, socio-economic despair, and the bravery of vulnerability. “Tears/beers/fears” wins standout track by a mile by best exemplifying these currents. If there’s an argument to be made that this phase of the genre is a little played out, This Will Haunt Me may be Exhibit A. So the themes are a little overwrought, and if Pop-Punk isn’t your bag, or you have a hard time relating to those people dealing with their thirties or impending thirties (or, specifically on this record, forties), I highly recommend you downshift for this spin. Grab a six pack or a joint, find yourself some sunshine, and take it for what it is. If those things are your bag, burn this shit to a CD and cue it up for your next road trip- anyone in the car bitching about it on the drive up will be singing (yelling?) as loud as the rest of the carload on the way back down.

Maybe Dollar Signs are trying too hard here, and it’s clear these guys have heard (and, I’d wager, aimed to reproduce) what Jeff Rosenstock has been doing since 2015, and what Andrew Jackson Jihad quit doing in 2012. But if it’s a guilty pleasure headphones-special you’re seeking, here it is. I keep wanting to listen to it, that’s what matters most. I was lucky to catch these guys a year or two back at a pretty fun bar here in town, and the songs from their previous release, 2015’s Yikes, took on a differently edged voice live than recorded, and I’ll be looking for nearby tour dates after this release for years to come. This came out on A-F Records, so the early bandwagon may have already set sail, but jump aboard the next cart to come along. It’s a fun ride.