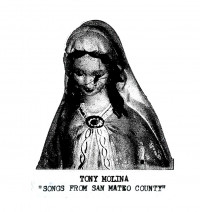 In and out in fifteen minutes. Seems to be the way of Tony Molina. On previous records such as Dissed and Dismissed, Molina has mostly held tight to concise songs and sketches that pass in the blink of an eye. On Songs From San Mateo County, Molina’s collection of “unfinished and unreleased material”, he does the same.

Molina’s music has several things going for it. One is guitar fireworks. For that, one doesn’t need to look past the first song, aptly titled “Intro”. At thirteen seconds, “Intro” might seem slight and skippable, but that’d be a dumb choice. Instead, with an exhilarating guitar arpeggio exploding over a quick stomping rhythm, “Intro” emphatically stakes out its territory. Elsewhere, “Where’d You Go” (which might be my favorite song on here), with a short guitar solo after the initial verse that reminds of J Mascis, and “Separate Ways”, with its closing set of guitar solos battling for supremacy and then dueling simultaneously, demonstrate the taste Molina has for marrying the perfect notes to the perfect moment. I love this stuff. But I should mention that some might notice a “formula”: fuzzy rock song makes its way through a verse before closing with a rapturous guitar solo.

Songs From San Mateo County also sports great songs. Whether the fuzzed-out guitar rock of “Don’t See The Point” or the chiming, almost wistful pop rock of “Not The Way To Be” and “Fallin’” (which also might be my favorite song on here - I’m indecisive), Molina has his way with hooks and melodies, at different moments bringing to mind everything from a less cryptic Guided By Voices to Blue Album-era Weezer. I think I might even get a Sugar vibe from some of this stuff. And when he wants to get pretty, he pulls out “Word Around Town”, which could fit easily next to Tobin Sprout on a playlist. And instrumental closer, “Outro”, comes from the 1950’s, reminding me of the band playing the high school dance in Back To The Future in the best possible way.

Finally, Molina’s lyrical economy keeps things succinct and focused. Whether lamenting about not wanting to change for someone else (“Don’t See The Point”), falling in love with someone only to be unable to tell them for fear of scaring them away (“Fallin’”), or wanting to be something for someone but never quite getting there (“Don’t See Me Now”), Molina conveys melancholy, stubbornness, and frustration in only a few lines. It’s to the point, and that’s the point.

For an odds-and-ends collection, this one doesn’t have a whole lot of misses. “#1 Riff” has some pretty acoustic guitar, but seems unnecessary. “Been Here Before”, one of the faster songs on here, also sort of misses its mark. At least for me. But that’s about the closest I can come to complaining.

Songs From San Mateo County is a cool record. I like it a lot. Those looking for some good guitar music that can wrap up in fifteen minutes time might want to give this one a chance.

Drunktank: Return of the Infamous Four