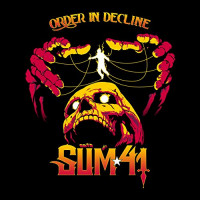 Ontario's Sum 41 is back, following a series of singles and music videos, and the ultimate release of Order in Decline on July 19th.

The effort from a rock band who's discography has dabbled everywhere from skate punk, radio pop rock, to heavy metal is a breath of fresh air. Generally speaking, the release focuses more on the group's strong points: Punk and metal riffs with a high level of energy.

"Turning Away," the album's opener fades in with eerie piano leads, reminiscent of Crimson-era Alkaline Trio, followed by heavy guitars and a jumpy tempo. "Out For Blood" rips open with crushing chunky guitar and drummer Frank Zummo's hammering technique. A slow build in the bridge leading to two trading leads from guitarists Tom Thacker and Dave Baksh make the song a highlight of the album.

"The New Sensation" showcases singer Deryck Whibley's vocal limits. He has developed his dynamics and physical control of his tone tremendously throughout the last decade. Like his writing or not, he has a lock on pitch and a range that far exceeds most other pop punk veterans from his time.

"A Death in The Family," "Heads Will Roll," and "45 (A Matter of Time)" are all in a great pocket of the record, glimpsing into a more mature and decisive approach to the sound the band armed on 2002's Does This Look Infected? or 2004's Chuck. Also notable is the blatant subject behind "45" and "The People Vs..." being the current political climate in the United States. While the band's rips on George W. Bush on 2007's Underclass Hero came across as forced and bandwagon-y, Order in Decline feels genuine, and hits much harder.

"Never There" and album closer "Catching Fire" both drop the riffs and enter slow ballads, with the former being an honest letter by Whibley addressing his early childhood, and being raised solo by his mother. The writing is methodical, but like any slow jam spacing Sum 41's entire career, the resulting song is disgustingly over-produced to horrible U2 song levels. At least they are consistent.

I will always welcome a riff frenzy banger from Sum 41, and skip over the tracks that aren't. All in all, this was a fun listen, and it is clear that the band's current lineup is an important part of that.