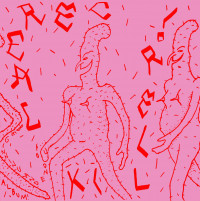 When I was younger, I had this recurring dream. In it, I kept getting chased down this long ribbon of highway by the Great Grape Ape. Unlike the cartoon version, the Grape Ape had these bugged out and bloodshot eyes. And instead of his mantra “Grape Ape, Grape Ape” coming out in a goofy, dumb, childlike voice, my ears were lacerated by these same words, but spewed as a maniacal scream. Oh yeah, and he spit nails out of his mouth as he rolled after me. Stupid, yes. Ridiculous, of course. But the chaos and danger was palpable. I think Cereal Killer might do well to soundtrack such a recurring dream.

This is the only Cereal Killer I’ve ever heard, and on The Beginning & End Of Cereal Killer, they are gloriously distorted, warped, and manic. They’ll howl, they’ll bash, and they’ll pummel with a ferocity and vengeance rarely seen. All wild energy, all the time. Coming from Australia and featuring members of other bands like Wet Blanket and Ausmuteants, The Beginning & End Of Cereal Killer is the last you’re likely to hear from these guys as they claim to be done after getting this out into the world.

Early highlight “Your Punk Scene Can Suck It” bursts from some slightly spacey guitar effects, digging in and thrashing about with a violent intensity. Indiscernible screams cut through before the song breaks into an anxious and repeated guitar riff that feels like a bombing is in the air. It’s brutal and vital. “CK Society” brings an insistent guitar and maybe the most possessed, manic vocals on the record. When it moves into a slowed, stomping march during the final minute, it seems that minds are being lost on some sort of death march. In the middle part of The Beginning & End, “Being Cool” has this really cool stuttering guitar riff that reminds me of the Stooges and a slightly more mid-tempo rhythm that lets a bit of a groove to form. And this one might be the closest they get to volume dynamics as the guitar is slightly muted during the verse and a bit more serrated and noisy during the chorus. “Bow Now Now” opens with a guitar that sounds like the most vile, dirty, and violent Led Zeppelin riff imaginable before becoming a speedfreak. And as the record nears its final lap, “Should Punks Be Allies” leans heavily into the bass with the guitar acting more as an accent, an incessant warning. Closer “Big Mix Is A Big Bitch” opens with a minute of electronic blips and sounds before exploding into another thrasher. Howl’s last ten to fifteen seconds at a time. The chugging mid-tempo break is kind of entrancing. It’s good stuff.

So here’s the downside. The recording quality is rough. It’s made to sound violent, and so it sounds really distorted throughout. If that’s a hang-up, you might want to go the other way. But for those who want to hear something wild, this is a good bet. Cereal Killer channels the frenzy of the Germs. They stomp like the Stooges. They sound out of their minds like Night Birds. And on The Beginning & End, they’ve created a ragged and wonderful first and last record.