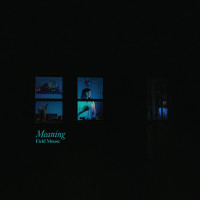 Independent music is rarely feels seasonal. Outside of Warped Tour and festival season, very little in punk and alternative music is tied to the calendar. Albums are recorded between tours and released as soon as they’re mixed and mastered. So it feels weird to say that Field Mouse have released a perfect summer album, right on time, with their new full-length Meaning.

This is an album for rolling down the windows, putting the top back, and cruising around with the volume up. Field Mouse has always been a shimmery, dream pop band, but 2016’s Episodic had punk rock heft underpinning its haze which is jettisoned on Meaning to make more room for gauze. The juxtaposition instead comes from the themes of the record which singer/guitarist Rachel Browne says is “More or less about the end of the world and all of the ways that it seems to be happening.” The opening of the album captures a bit of that dread, with strings and an ethereal vocal performance that builds tension for a minute and a half before crashing (literally) into Meaning’s standout track ‘Heart of Gold’.

‘Heart of Gold’ can’t really be oversold as a single. It’s note-perfect from the huge guitar riff in the chorus to the “I’d never want bad things for you” chorus that instantly installs itself in your head for the rest of the day. Browne knows her way around a vocal melody and nowhere on the album is that more evident than ‘Heart of Gold’ and the fourth track ‘Skygazing’.

Meaning is filled with those touches that take it to the next level. The string section from from the opener make four more appearances to add a lush texture. There is a synth voicing on the second single ‘In Blue’ that made the song for me, and despite being subtle, was impossible to ignore once I’d noticed it. Meaning was produced by Kyle Gilbride of fellow-Philly rockers, Swearin’, and while fans of that band may enjoy Meaning, it probably has a bigger appeal for fans of more conventional indie pop, a la Snail Mail. What Meaning really feels like is a band on the cusp of taking the leap to wider appeal. This in an album of songs that are ready for radio play, cross-genre California festivals, and licensing for CW shows and mid-size car commercials. It might be a good idea to get into them now, so you can complain about how big they’ve gotten this time next year.