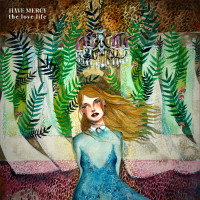 Since 2013's The Earth Pushed Back Have Mercy have struggled to recapture the charm and exude the indie majesty of songs like "Let's Talk About Your Hair". I personally hold that album in high regard, and while A Place of Our Own was a solid effort a year later, amid lineup changes and frontman Brian Swindle trying to find a new voice speaking on love, religion and the whole nine, the band was charting a new direction that honestly felt like lukewarm waters. It's why 2017's Make The Best of It felt like wasted potential. However, come The Love Life, while the band members haven't hit the strides from six years ago, it's a step towards the light again.

A big part of me felt like this gear down had to do with a switch from Topshelf to Hopeless Records, which usually plumps for more polished, accessible pop-punk songs. And make no mistake, there are quite a bit of those here like "Dressed Down" which feels like an Owl City track and "Control" (a twinkly jam that reinforces some sort of American Football influence). But in between these, the Baltimore act does explore new spaces and the record doesn't trail off and end up confined like the last couple.

"Heartbeat" has that cheesy '90s pop rock feel to it, but there's a more expansive aura to the album as quite a few songs do touch melodic, shoegaze, atmospheric and post-rock sounds -- very much along the lines of the last American Football record. You can even tell Swindle's paying homage to Mike Kinsella at times, opting for something that feels more alt. indie yet wispy and vulnerable. I heard fans say it's a bit like Hinder and while that's a bit savage, I can see where they're coming from given that "Clair" feels like a U2 jam tempered for modern college radio. But when it comes to the style of old, look no further than "So Like You" and "Mattress on the Floor" which blend aggression with melody and rhythm so well, leaving you wanting more of the vintage Have Mercy.

These songs make up for the drab efforts and remnants of the last album which do creep into the second half of this album at intervals but overall, you really do get a better mix this time around. From warm acoustics to synth beats (check the opener in "We Ain't Got Love") as well, it is refreshing to see Have Mercy haven't walked back their new path, even if I wasn't a fan. They're sticking to their guns (mostly), but still bringing back elements of the past, and as of this record, it feels like they're slowly but surely on the road to the evolution they so desperately seek.

Square Shapes: After the Fact