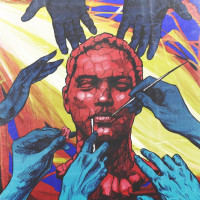 In the Promise of Another Tomorrow (2018)

In the Promise of Another Tomorrow is Regulate’s first LP. They’ve put out a slew of shorter releases prior, and with this full-length Regulate seeks to expand both their sound and their song-writing capabilities.

The album leads with a great opening track in “11:13.” The guitar work in the song shifts between fast grooving riffs and choppy start-stop licks. This is generally indicative of much of the guitar work on the album at large too. The lyrical content on this song is both personal and socio-political, as it chronicles a young person being profiled by police while simply trying to make it to class. There’s a pain in the lyrics, and delivered with precision vocally, that transcend the anger and ferocity so typical to vocals in hardcore bands.

“Mindcrime” is another standout on the LP, opening with similarly strong guitars and a fast pounding bass line. As the song moves into the choruses, the choppy guitar work picks up again. However, the guitar octaves and lead in “Mindcrime” add a depth to the song that elevates above others on the full-length. Once again, the lyrics here are insightful and thoughtful. But they are delivered with a simplicity in both word choice and vocal pattern that intensifies the song’s candor. Sebastian’s crunchy vocal delivery does well in offering the anger that hardcore listeners seek, but it doesn’t make it hard to decipher the lyrics which is a big plus in this genre.

In the Promise of Another Tomorrow’s most ambitious song is “Character Arc,” situated right in the middle of the LP itself. Showcasing Sebastian’s impressive ability to sing, the song employs some unlikely vocal melodies and admirable song writing as well. While “Character Arc” still has the trademark Regulate sound, particularly in its intense closure, there is a clear demonstration here that Regulate has musical dexterity.

The record’s ninth track, “Wrong Side of History,” might be the most energetic and impactful. The opening riff is fast-paced but with a great groove to it. The song moves into a horse-hopping verse that sets the foundation for highly political lyrical content that is delivered with both staccato and drawn out vocal patterns. The antagonism is palpable through the entire song, cresting with a clever bass line that segues right into a brief but pounding breakdown.

Regulate have crafted an industrious and expansive LP with In the Promise of Another Tomorrow. They are utterly a hardcore band, but they also flex some ambitious musical muscle on the record. There is a distinct vibe to Regulate’s sound and they know what works for them. But it’s also clear they aren’t afraid to take some musical leaps. That’s rare in the hardcore genre. A worthy first full-length from a band that’s been rising for a few years now.