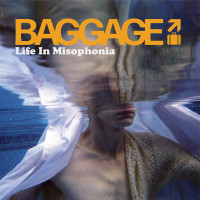 Life in Misophonia comes in as Baggage’s debut full length, building upon the Flint, MI-based band’s previous EPs. What’s being built though, is a very different sound from their previous releases, perhaps showing more of where the group would like to be headed sonically.

The record has ventured much more into an alternative rock sound, with some tracks being unreservedly down-tempo. This marks quite the departure from the group’s The Good That Never Comes, 2017’s EP which stayed much closer to frontman Jonathan Deiner’s previous work in the now-defunct The Swellers. Instead, Misophonia stays a bit slower, less reliant on hook-filled pop punk, and leaning more on Deiner’s songwriting.

That songwriting turns out to be the strong suit of the record: reflective and well rounded. “Horseshoe” is a clever song about life in a small touring band, accurately describing shows that, while far from sold out, are still worth it. “Where You Are” also sticks out as a strong track about missing someone you’ve lost touch with. It’s a sad narrative, but it’s also crafted with a strong and confident voice, keeping the overall effect positive. The strongest tracks are, perhaps unsurprisingly, the ones where Deiner is able to forge a personal connection and get the listener involved.

The aforementioned songs also highlight Misophonia’s higher moments in musical arrangement. The band is at its strongest when the guitars are fully in play, whether that’s cranking up some chords on the chorus of “Where You Are” or the fluid styles showcased on “Flying Home for a Funeral.” Unfortunately, the band doesn’t always go that route sonically, and a few songs fall by the wayside because of it. Even a song like “Potholes,” which has its strong moments, can plateau a bit too much and become just another track that becomes less than memorable.

This is also Deiner’s first full length as a frontman, a challenge that he steps up to the plate and gives it his all. He’s got a solid voice, but there are a few times where he gets some support vocally from either harmonies or backup vocals where those additions really add to the sound of the songs. It happens surprisingly sparingly throughout the album, so when vocal changes occur, it’s very apparent very quickly.

As far as debuts go, there are very few that knock us listeners out of our seats right away. More often than not, it’s a band finding its footing, and that’s alright. Baggage seem to know what they want to be, they just have a bit more to go to get there.

Regulate: In the Promise of Another Tomorrow