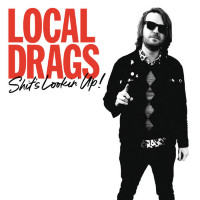 Once in a while a band comes through on a record, figuring out how to make something that has hooks for days and gets you singing without polishing everything up so much that it becomes completely neutered. Local Drags, from Springfield, Illinois, have managed to pull this off with Shit’s Lookin’ Up!.

Local Drags has connections to pop punk in the form of Starter Jackets (a band that I’ve admittedly struggled to come around on). But it seems like the new wave undercurrents of Starter Jackets have been left behind in favor of both an 80’s power pop and a 90’s alt-rock and pop punk vibe. Throughout Shit’s Lookin’ Up!, Local Drags brings great sounding guitars and masterful melodies to their songs. And the hooks, holy smokes, the hooks! At various points, guitars drop out for a perfectly timed vocal entry (“Can Probably Wait”), stop-and-go patterns pull the rug out from under a song before throwing you back in (“Plot Holes”), drum patterns go through subtle changes to keep you rhythmically engaged (“500 Hours Free”), and songs near a blast into full-throttled rock if only for a single beat before retreating (“Michelob Ultra”). Each of these tricks is so very effective at grabbing the listener by the collar, shaking them up, and keeping their eyes wide open going ahead.

On Shit’s Lookin’ Up!, Local Drags does a subtle shifting of gears song-by-song, mostly to good effect. Songs that fall slightly more towards the pop punk spectrum begin the record on a couple of high notes, “Can Probably Wait” and “Plot Holes”. Both are upbeat and enduring, with lyrics that are fairly universal (example: “I guess it went alright, I guess it could’ve been worse...shit’s looking up”). Elsewhere, songs like “Hidden Track” and “Michelob Ultra” are just fantastic power pop. They seem beamed in from a 90’s alt-rock station and would fit well alongside Matthew Sweet and the Posies. Pure pop goodness.

While this is mostly good-to-great, there are a couple of hiccups. Acoustic song “Double Bird” seems intended as a change of pace, slowing things down halfway through the record. But it comes off as a bit of a momentum thief, at least to me. “Trash Bones”, the follow-up to “Double Bird”, attempts to reclaim that momentum with a faster pop punk vibe, but doesn’t quite make it back (for what it’s worth, that momentum is easily back by the next song, the aforementioned “Michelob Ultra”). On Shit’s Lookin’ Up, however, these off moments are the exception, not the rule.

On Local Drags bandcamp page, they note a “guy at a show once” said they sound like a “loud Gin Blossoms”. I wouldn’t go there so much as Matthew Sweet and the Posies, maybe a bit of Pleased To Meet Me-era Replacements, and Cheap Trick. If that’s your thing, then this will be 23 or so minutes well spent.

Strung Out: Songs of Armor and Devotion