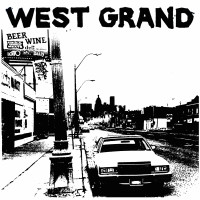 West Grand is a new trio from Detroit featuring some familiar faces. Two of the members, guitarist/vocalist Kyle Geen and bassist Cris Golan, come from Break Anchor, one of the best and most underrated punk bands of the last decade. Break Anchor essentially had two frontmen. Guitarist/vocalist Jason Navarro (Suicide Machines, Hellmouth, J.Navarro & the Trraitors) handled the raspy, angry singing and screaming, while Green provided the smoother vocal stylings. I’m not sure how the songwriting broke down, but I assume it was along similar lines. What’s the point of all this rambling? The point is, West Grand might remind you of Break Anchor at their most vulnerable moments. The other influences might be Superchunk or Husker Du. Green lets his voice go to different places than he does with BA, and you might hear something resembling a twang sneaking in.

Ultimately, West Grand feels like a breakup record. All four songs have a real sense of melancholy. and all four songs are fairly compelling. (Am I emo now?) The amount of hopefulness and hopelessness vary, but “Here to Stay”, “Hostage”, “Just Fine” and “Sometimes” sustain a fairly consistent mood across the relatively brief ten and a half minute run time. This is not necessarily music to play at a party, but in the right state of mind, it will really hit the spot. West Grand is currently only available digitally, but I have it on good authority that the band has more than enough material for a full length. It will be interesting to see where they go next lyrically. (You can’t be sad all the time, right?) Until then, these sad songs are a great start. WIth no new Break Anchor music looming, West Grand has given fans something else to get excited about.