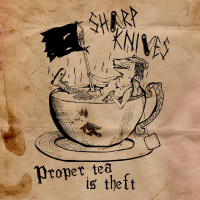 Sharp Knives hail from Lisbon, Portugal, and other than that fact, and a few that I read on Band Camp, that’s all I know about them that is not put into their music. Yet, somehow, I feel like they’ve been in my life forever. Their debut EP Proper Tea is Theft is my favorite release of 2019, so far.

It begins with a spoken word piece in “Kill the Father” that forces the listener to question what they just got themselves into. Then the guitar creeps in. Acoustic, and crisp, and then followed by additional strings, all while the speaker is explaining to her father why the only way she can remain in this world is to destroy his. Shortly after the speaker stops, the guitars start to rip, with a very latin vibe, and both vocalists explode with “Kill the Father”. The lyrics after that were hard to follow, partially because of an accent, but more importantly because I was so engrossed in the underlying music. I have never heard a washboard player that I was more impressed with. The sounds that come out of such a simple instrument took the music to a level that I hadn’t heard in the Folk Punk world, maybe ever.

Track two follows in the footsteps of the previous, but brings with it a horn section. “A Dish Served Cold” takes no breaks, never slows down, and delivers exactly what I want to hear from a thrashgrass band, with dueling vocalists that contrast so deeply that they become instruments themselves. I can’t help but make the comparison to Days N Daze, but only in this vocal set-up. The track ends with the band ripping off Blondie’s one way or another chorus, but in a way you’d have to hear to believe, and as soon as that ends, they blow right into their version of NOFX’s “Lori Meyers”. Interestingly, both vocalists are singing both male and female parts, at times, making it extremely intense.

“We might Never Change the World…” follows the partial, and then full, cover. It’s a more traditional folk-punk song, with less explosion than the first three tracks, yet it is likely my favorite track on the EP. It has a soul that bleeds into the lyrics and the music, and seems to be their call to arms. I’ll admit I’m not familiar with Portugal’s government/leadership, but the lyrics are clearly a commentary on the need to change everything that is wrong with this world, “And if that’s not enough reason to breath, why are you still breathing?”

The final track is clearly the second half of this anthem, “But At Least We’ve Changed our Lives” picks up from that silence, and takes the question of what can we do to change the world to the answers commonly seen in the anarcho-punk world: we do what needs to be done for each other. We can’t change the world if we don’t first change ourselves.

My words are not enough to express my love for these five tracks, so I’ll end with a quote they end their thanks on Band Camp with: “So let’s destroy out of love and build out of anger.” -- Evan Greer.

The Freeze: Calling All Creatures