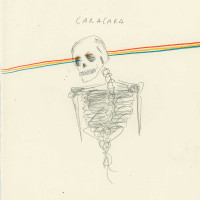 It’s been quite a run the past few years for Philly-based artists. Seasoned vets aside, there’s been this groundswell of new(ish) talent surging towards mass appeal. There’s a solid core here, but the commonality doesn’t seem to be genre so much as the immersion of the city itself into the songwriting and storytelling. The neighborhoods and social status are the backdrop, with the dark, yet hopeful tonality remaining as the constant. Bands are thriving through injecting this grit and blue-collar ethos into their creativity and lyrical content and Caracara is one that falls into this same archetype, but just missed out on this recent rush of widespread reach as their 2017 debut LP, Summer Megalith, flew well under the radar.

This year, with producer Will Yip on the knobs, they released Better EP, three songs pushing the band towards a more streamlined and structured sound. They’ve stripped the seemingly Modern Baseball influence and instrumental inspirations, focusing on writing straightforward alternative rock songs layered with tremendous emotion.

The EP kicks off with the title track, “Better,” which quite honestly is one of the most captivating songs I’ve heard this year, perhaps even years. It’s a six-minute masterpiece really without much complexity, and with the inclusion of “K&A,” I can only assume it’s personifying a relationship deeply affected by the well-known drug epidemic in the city’s Kensington section. The first half of the track is mellow and gripping, but takes an epic turn around the 3:00 mark.

Enter Marisa Dabice of Mannequin Pussy, one of those bands finding broader audiences and expanding success.

Symbolic or not, Marisa subtlety blasts in with this euphoric explosion preceded by a build-up of pounding drums and elevated spirits, conflicting with the deeply heartbreaking tone of the song overall. It’s a flood of warmth that creates this strange, yet positive sensation all while a gut-wrenching verse (All I know / You said you’d lay low / Cold halos / You chose your way down.) is belted out in repetition. “Better” culminates with one final eruption from singer Will Lindsay as he howls the chorus over Marisa’s now subdued vocals, bringing the track full circle.

“New Chemical Hades” starts soft, leading with the album’s most memorable lyric: I have become too apocalyptic / For my friends to want me around. The song is controlled, absent of emotional bursts, yet tugs at your feelings. The simple delivery of “I can change” cuts to the heart, shaping it to become very powerful, but not overpowering.


Closer, “Learn Your Love,” is a straight up emo-influenced jam that could have fit right into In-Flight Program.

Caracara are still pretty fresh, but Better EP proves they’re ready to make their ascent. They have the city in their blood and the talent to grow out of the dim lit dives and damp basements. Expectations will be high for their next LP, almost apocalyptic, ready to take the alt-rock world by storm.

Protomartyr: No Passion All Technique