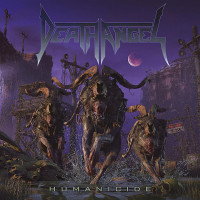 Death Angel is one of the more unsung of the great ‘80s thrash bands. Founded by teenagers way back in ‘82, they were a leader in the second wave of thrash that came out of the storied Bay Area scene. If the ‘Big Four’ of thrash was expanded to the ‘Big Eight’, they would almost certainly make the cut. They split up in the early ‘90s, but have been playing steadily since reuniting for a 2001 benefit show for Testament singer Chuck Billy, who was suffering from cancer at the time. Over the past 15 years, their output has been more consistently good than most, if not all of their contemporaries.

Humanicide is the 9th Death Angel studio album, and their 6th since reforming. It’s worth noting that it marks the first time that the band has recorded three records in a row with the same lineup. That lineup cohesiveness is definitely paying off. It is also the 3rd album in the ‘Wolf Trilogy’ that started with Relentless Retribution in 2010 and continued with The Dream Calls for Blood in 2013 (but for some reason skipped the excellent The Evil Divide in 2016.). That being said, you don’t need to be familiar with the first two thirds to appreciate or understand Humanicide.

Death Angel has always been able to incorporate a lot of melody into their thrash attack. Those contrasts are on full display on Humanicide. The title track starts things off with some singing leads before shifting into full beatdown mode. “Aggressor” and “Immortal Behated” do the same. The melodic parts are extremely melodic, and the heavy parts are extremely heavy. Founding guitarist Rob Cavestany’s riffs are on point, and so are Mark Osegueda’s raw throated vocals. As you would imagine, the record’s lyrics don’t seem to place much faith in the human species. “I Came for Blood”, and “The Pack” later on, are the most clear references to the ‘Wolf’ concept. They are also a couple of the catchiest songs on the record.

About the midway point on Humanicide, the mood starts to shift. At the end of “Immortal Behated”, there is an extended piano interlude, a first for Death Angel. Starting with “Kicking and Screaming”, things seem to get a little more hopeful. As in, we humans have fucked things up pretty badly, but it’s not too late to try and fix it. “The Pack” stresses the importance of sticking together. Back to back “Revelation Song” and closer “Of Rats and Men” bring things to a satisfactory conclusion. Humanicide is not exactly a concept album, but there are surely conceptual influences.

Like a lot of great thrash bands, Death Angel has never shied away from including prog rock elements in their sound. Humanicide might be the most progressive record in their catalog, but don’t let that scare you. There is still enough heaviness for the most militant headbanger. It continues with more modern themes introduced in the 2000’s, but also occasionally gives a sonic nod to the bands earliest records. Death Angel has continued their streak of great records. Metalheads old and young should be able to appreciate Humanicide.

Off With Their Heads: Be Good