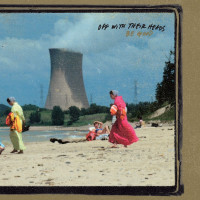 Hurrah, I hear you cry. OWTH are back! In fairness, 2016 did see the release of Won’t Be Missed, but this is the first collection of original, full-band songs from the mind of OWTH frontman and sole perpetual member Ryan Young since 2013’s Home. 6 years is a long time for a band who were previously kicking out albums every 2-3 years, so what’s been up? Well Young has been through a pretty transformative time in that period. He has been spending some time working on himself and building a life in Chicago beyond just living out of a van, shows and drinking – and he’s even been helming a weekly podcast (Anxious & Angry) alongside Stacey Dee from Bad Cop/Bad Cop discussing not only music, but life in general and how your own mind can sometimes not necessarily be your ally.

So there’s been change going on in the chief songwriter’s life and I would say that you can tell that from the feel of this record. There is a composure about it that points towards a self-assuredness that has doubtless come from the past few year’s experiences. I would even go so far as to say that there’s a sense of optimism that permeates the songs, and although that optimism isn’t entirely overt, at its most potent it manifests itself in a fist-pumping defiance that is both energising and hard not to be swept up in. All that being said, it doesn’t come straight out of the gate that way. The album opens in contemplative fashion with recent single ‘Disappear’, then moves immediately into the title track also recently released as a single – by the end of which, that defiance and hesitant positivity is beginning to reveal itself and by the time the ascending riff of Track 3 ‘You Will Die’ kicks in, then it’s foot-stomping, beer-swilling, punk rock exuberance all round.

Young was also on production duties again for the record and seems to have finally come to terms with the role (which he’s openly stated in the past that he didn’t enjoy). The result is a thick-textured classic modern punk sound which works as the ideal bedrock for Young’s signature gruff vocal, which he uses in a slightly more varied way across the record than in some previous outings. He’s always had the ability to carry a tune well whilst still maintaining the gravelly tone that we all associate with OWTH, but there are signs here that his foray into the world of acoustic balladry (Won’t Be Missed) may have given Young some more confidence in the range of his voice and there are moments of real dynamics on display here. “Severe Errand” starts with an almost casual, deep melodic vocal approach and yet within 2 minutes, the transition to full-blooded primal scream is complete. Similarly, “Locking Eyes” is basically a tender lament until the halfway point when the powerful, catharsis-drenched refrain of ‘Yeah / I lost you’ kicks in before culminating in another anguished bellow at the close of the song.

Reading that back, I can appreciate it doesn’t necessarily sound much like a record infused with optimism, but it’s not in the lyrics so much as the music itself; its ambience, delivery and tone. Even when covering subjects such as regret, frustration and loss, Young’s newfound perspective allows for a more worldly approach to these subjects. Indeed, when asked about the record, he said “All the other records were about moping around and feeling sorry for yourself. This one is less about feeling sorry for yourself and more about accepting how goddamn miserable you are.” An interesting take on understanding one’s own mental state, but one that makes a lot of sense set against the backdrop of this record.

In short, Be Good feels triumphant. A glowing, rough-edged, honest snapshot of getting older in today’s world, with its daily portents of the coming apocalypse, through the filter of one punk’s most relevant contemporary voices. It’s pacey, rabble-rousing and fun, but still has a message we can all get behind. Paraphrasing the title track, Young states simply “Be good, be loud—that’s sometimes all you can do, I guess, as cheesy as that sounds." Sound advice, I’d say.