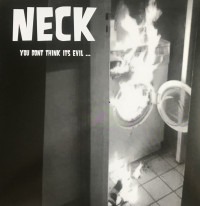 Neck are cretins. They make some real (or put-on) knuckle-dragging, simple, anti-intellectual punk rock. With hooks. And lots of excuses to sing preposterous lyrics.

Neck sound a lot like Head. Much like Head, the songs Neck put together on You Don’t Think It’s Evil are catchy and dumb in lots of right ways (and a couple wrong ways). It’s all pretty much unoriginal Ramones-ripping punk rock, but it’s done pretty well; no real guitar or bass frills, no drum fills, only songs done in a minute and a half or less.

You Don’t Think It’s Evil follows up their previous record, Hate To Read, with only a few minor changes. The vocals are pretty clean and clear, usually stretched to a higher register but never really strained to a scratch. Melodies might be obvious, but they also seem right more often than not. The lyrics are simple and dim-witted, but also pretty funny and biting when they hit right. “Electronic Dating” is counted in like all good Ramones rips, launching into a catchy hook-filled romp about the superficial and creepy parts of looking for love online. “Girlfriend” follows up with a similar formula, but shows some nominal progress as Neck inserts a slight guitar solo. I’m pretty sure the twenty-plus songs on Hate To Read never tried any solos. This one also has some cool backing vocals. Beyond awkward and oddball relationship songs, Neck brings up unruly nights and the struggling morning after (“Dead Eye”), annoying self-righteous exercisers who won’t take the bus (“Brag Jogger”), and murder-for-hire dreaming (“Hitman”). My likely favorite on the record, “Skyforce”, is about getting a job with a cool uniform “just because”. Each verse has a cool refrain with earworm backing vocals. And the guitar hook won’t get out of my brain. On songs like this, they best demonstrate the idea of finding a great riff, giving it out, and then moving on before it wears out its welcome.

Neck has a good thing going on You Don’t Think It’s Evil, and I appreciate the slight attempts to alter their sound. Personally, this doesn’t come off as my favorite (save that spot for Hate To Read). But there are some fantastic songs, full of the slightly-evolved neanderthal thing that I expect. It’s raw, the music has hooks for days, and the singalongs are fun. If that’s your thing, this’ll do nicely.

Oso Oso: basking in the glow